GRNews
GreekReporter.comGreek NewsCyprusCommittee on Missing Persons in Cyprus: Greek-Cypriot Missing from the 1974 Turkish...

Committee on Missing Persons in Cyprus: Greek-Cypriot Missing from the 1974 Turkish Invasion Identified 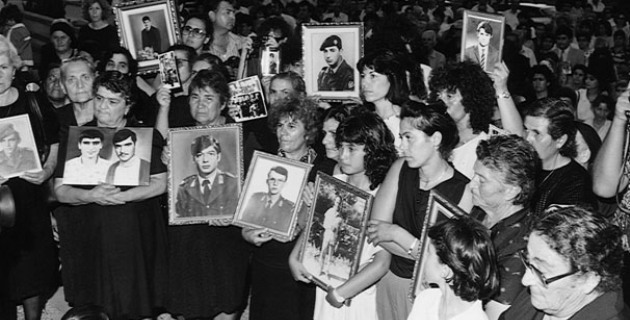 The Committee on Missing Persons in Cyprus (CMP), in a press conference held today at the Anthropological Laboratory in the UN-protected area of the now defunct Nicosia Airport, has announced it “identified the right person” in the case of missing Greek-Cypriot Georgios Foris. At the same time, the three members of the Committee announced that a Red Cross independent expert has already been requested to probe this specific case.

As the Committee explained, Foris originated from the village of Assia and has been missing since the 1974 Turkish military invasion. His remains were exhumed from a well in Assia, along with the remains of another 38 unidentified individuals. His family has recently contested the identification process, although as described, some of the remains returned to his relatives did not belong to him. Therefore, the family has sought a DNA re-examination of his remains, undertaken by the Cyprus Institute of Neurology and Genetics. “In this case, as in the 567 other cases of missing persons identified by the CMP, we can certify that the right person was identified,” said Paul-Henri Arni, the Committee’s third member.

The press conference was held by Arni, Greek-Cypriot member Nestoras Nestoros and Turkish-Cypriot member Gulden Plumer Kucuk. Referring to Foris case, Arni, after expressing his sympathy to Foris’ family, highlighted that “our archaeologists determined that most of the remains originally buried at the site had been removed, as has been the case in other locations. What was left was a large number of small, isolated commingled remains -that is mixed up remains- which our scientists have tried to associate to separate individuals in painstaking work over the past four years. In the case at hand, several larger bones, most notably a skull, were associated with a number of very small bones. Following well-established international practice in the identification of human remains, the CMP tested the larger skeletal elements, nine in total, for DNA. The smaller ones were associated based on anthropological analysis. Testing all bones for DNA would exceed the CMP’s financial means, and, more importantly, in the case of small bones, would require their destruction, leaving nothing or only small fragments that could be returned to families.”

Furthermore, as he explained, “the family of the missing person identified by us challenged our identification based on teeth characteristics and opted to seek a retesting of the remains using DNA. While we have not received any of the results, it appears that the analysis undertaken on behalf of the family confirmed that all nine larger bones that the CMP had identified on the basis of DNA had been correctly identified.”

The above, as Arni said, allows us to draw two very important conclusions: “Firstly, the CMP identified the right person. In this case, as in the 567 other cases of missing persons identified by the CMP, we can certify that the right person was identified. Secondly, the work of the DNA laboratory is not an issue in this case. If anything, the family’s retesting has confirmed that our laboratory, in this case the ICMP in Sarajevo, worked well. We therefore would like to stress that the discussion about bringing the CMP’s genetic work back to Cyprus has no place in the context of this case. Those who pretend otherwise are misleading the public.”

On his behalf, Nestoros said that in the cases of mass graves, where bones have been relocated at a later stage, leaving only a fraction of the original remains to scientists to determine to whom they belong, CMP is considering to start giving back to the families only the remains that have been analyzed for DNA. The practice today is to let anthropologists associate smaller skeletal elements in order “to give more bones back to the families” as the CMP members said, noting however the risk at stake.

Additionally, Kucuk noted that the CMP is aware of the families’ sensitivities with missing persons and added that the Committee is trying to provide them with all the answers, along with the remains of their beloved ones. As she further explained, there are a lot of cases of mass graves with “commingled bones” and noted the scientists’ difficulty to determine to whom they belong.

Asked about the relocation of remains in Cyprus, Arni said he has “no idea” who did it but added that this “happened everywhere. It happened also in the south,” referring to the free areas of the Republic of Cyprus.

Finally, according to Kucuk, overall, the CMP has exhumed almost 1,000 persons, with the remains of 400 awaiting identification. Another 1,000 are still to be found, she concluded.