Greek PM Tsipras: We Want a Solution, Not Rift 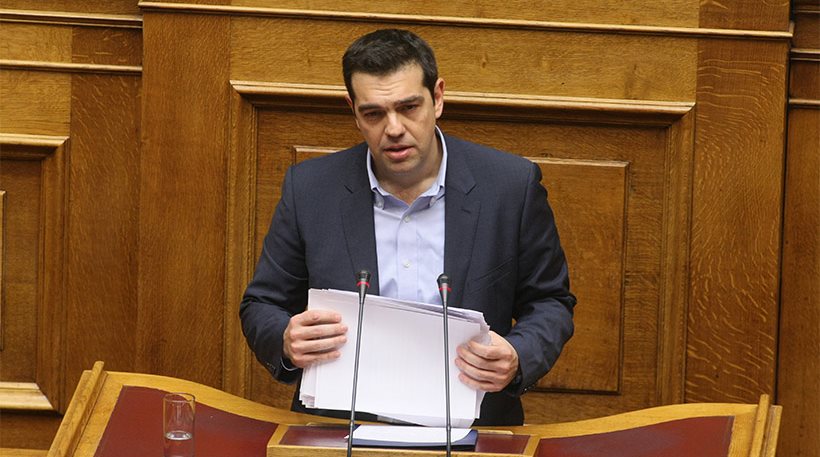 In three weeks we did not manage to overcome our problems, “although the citizens no longer feel the scorn and irritation,” Greek Prime Minister Alexis Tsipras highlighted in his opening speech addressing SYRIZA’s Parliamentary Group earlier today.

Tsipras reiterated that the Greek Democracy cannot be blackmailed and does not blackmail anyone, but is rather talking as a European Union equal partner. As he added, this is the first time that a Greek government says “No” and means it, while he accused German Finance Minister Wolfgang Schaeuble for losing his temper and expressing himself in a derogatory way toward Greeks. “I would like to highlight that it is better from him to feel sorry for those people walking with bowed heads,” Tsipras said referring to Schaeuble’s latest statements. At the same time though, he declared that the recent caricature depicting a Nazi-dressed Schaeuble that was published by Greek newspaper “Avgi” was an “unfortunate incident.”

Referring to the government’s “red lines,” the Greek Premier said that those are the “red lines” of all the people of Europe. “People look on us for a relief from the disastrous austerity policy and a turn into what we call sustainable development,” he clarified, adding that the long-awaited salvation will not come through a persistence on a mistake as Greece’s creditors are requesting. Furthermore, as he said, the Greek government wants an agreement to be reached but without the Troika’s “toxic” presence. “Anything else would be the acceptance of the idea that democracy is an unnecessary procedure for countries who are in support programs,” he explained.

Once again, he said, we will be original to another point too; honoring our commitments to the citizens, explaining that on this coming Thursday the first bill to ban auctions will be urgently submitted without any changes. The next bill, Tsipras continued, will put an end to the medieval working conditions and soon more bills will be submitted to the Greek Parliament in order to address the humanitarian crisis caused by the Memorandum policies.

Regarding the ongoing negotiations between Greece and its European partners, the Prime Minister underlined that the new government is seeking a solution and not a rift, while he referred to the statement made the previous week after his meeting with Eurogroup President Jeroen Dijsselbloem. Additionally, commenting on the Eurogroup draft statement on Greece issued yesterday, Tsipras said that the Greek government was ready to adopt it while “moving within the red lines,” although it was finally changed by Dijsselbloem. “The new project even specified the measures we had to adopt, so as the Memorandum would not remain a common content letter.” Concluding, Tsipras accused certain circles for undermining the future of Europe.