The Greek Family on American Television: ‘The Slap’ 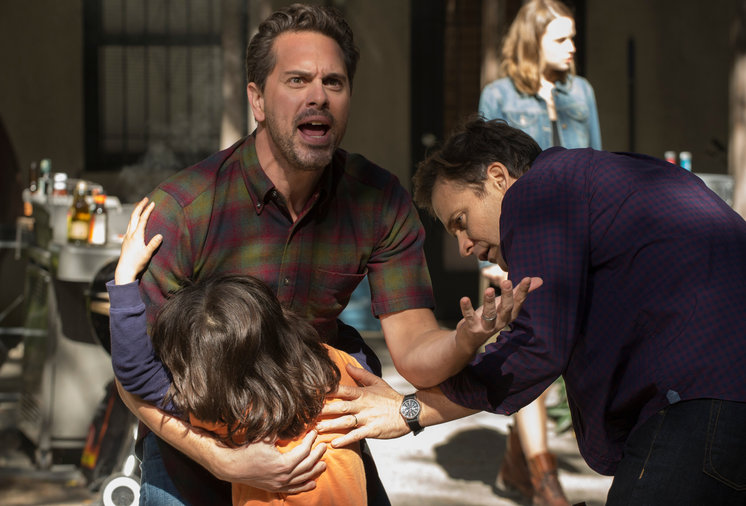 “The Slap” miniseries premiered on NBC this past Thursday night, and though there are no Greek actors in the mix, the show revolves around the lives of the Apostolou family and their friends. The way “The Slap” portrays the interactions of a modern Greek-American family gives Greek viewers a lot of food for thought.

The series is based on an Australian show, which in turn was based on the book “The Slap” by Greek-Australian Christos Tsiolkas. It deals with the fallout from an event during a birthday barbeque when one of the parents slaps another parent’s child for misbehaving. The premise may sound simple but the show explores the problems and inner lives of these characters in a complex and shocking way, as everyone’s secrets come to the surface in the fights that result from the incident. Each episode is told from a different character’s point of view.

On one hand, the show’s premise is not entirely based on the ethnicity of the family and the “wacky” situations that may result from the family’s Greekness, as previous shows were, like Nia Vardalos‘ “My Big Fat Greek Life.”

The first episode, “Hector,” explores the personal problems and confusion of the central character, Hector Papapostolou (Peter Sarsgaard). In this way, the show develops Hector as a complex character and allows the audience to dive into Hector’s head and thoughts, instead of portraying him as an outsider in any way.

That is definitely a step in the right direction, as it shows an increasing acceptance of Greek-Americans as “mainstream” in US society.

However, Hector’s parents, Manolis (Brian Cox) and Koula (Maria Tucci), definitely skew more toward the Greek stereotypes, complete with strong accents and an obsession with forcing enough food into their son’s home to feed an army.

When the Greek parents were first introduced, I was a little put off by how strictly the writers made them stick to every possible Greek stereotype. Manolis and Koula are very close to their son and love him, but also tend to overreach and meddle in his life a lot. They buy Hector, his wife and children tickets to Greece, which is generous on one hand, but also somewhat controlling, as they never bothered to check with Hector’s wife if she can even go on the dates they picked.

However, as the show continued to unfold, my annoyance gave way to the realization that the characters may be very stereotypical, but they also very strongly reminded me of many of my Greek-American family members and family friends. If many of the stereotypes are true for a big part of the Greek-American community, is the show really so wrong for showing Greek-Americans that way?

By the time “The Slap” was over, besides enjoying the plot and some great acting, I found myself fascinated by the show’s exploration of family dynamics, both within the Greek-American family and the family’s integration in US society.

In the first episode, you can already see the differences between the older Greek parents and Hector, their US-born and raised son. At one point, father Manolis tells Hector to control his wife, and Hector responds “We’re not in the old country, I don’t manage my wife.”

But at that point I realized that Hector’s parents’ attitudes were not related to the treatment of women in modern day Greece; their ideas were linked to the fact that, like many Greek immigrants, they tend to hold on to an image of Greece as it was in their time, in the mid-20th century, rather than as it is today.

While Hector is more Americanized than his parents as a first generation Greek-American, he is still not 100% integrated into American norms and values. He enjoys his close bonds to his parents and cousin, yet also has a hard time disagreeing and standing up to them. His English wife and American friends don’t really understand his “weakness” in the face of his parents, but many Greek-Americans watching will probably understand his dilemma, as they have been raised to be more respectful of their parents’ wishes and allow them greater influence in their lives than an American child might.

I will continue watching “The Slap” both for the stellar acting and complex story, and to see how it shows this Greek-American family’s interactions. Each episode is told from a different character’s point of view, so it will be interesting to see the family from different perspectives.

Tune in to NBC on Thursday, February 19, to see the “Harry” episode, shown from the point of view of Hector’s Greek-American cousin (Zachary Quinto).