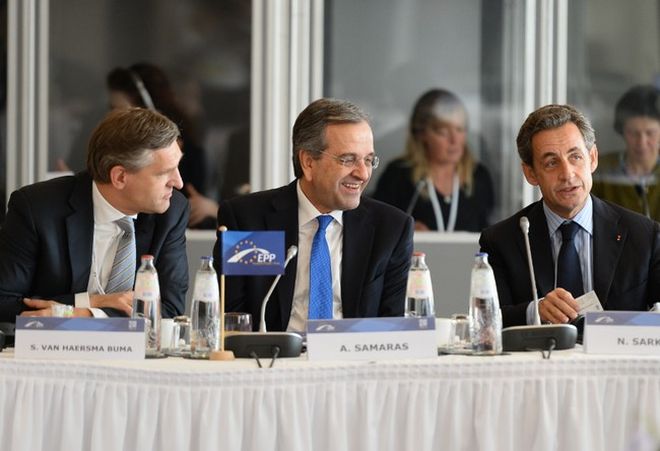 “My goal is to ensure the country’s European course, so I’m here. And of course the stalemate does not help,” said New Democracy leader Antonis Samaras after the meeting of the European People’s Party.
Mr. Samaras was referring to Greece’s negotiations with lenders in Brussels and the ensuing impasse.
The president of New Democracy had a bilateral meeting with former French President Nicolas Sarkozy, while on the sidelines he met with the President of the European Commission Jean-Claude Juncker, Spanish Prime Minister Mariano Rajoy, Portuguese Prime Minister Pedro Passos Coelho, Finland’s Prime Minister Alexander Stubb, Bulgarian Prime Minister Boiko Borisov and others.
Greece’s former premier urged European leaders to show a compromising stance in the negotiations in order for Greece to stay in the euro zone and asked them not to show punitive tendencies, according to iefimerida.gr.
Manfred Weber, Chairman of the EPP Group in the European Parliament, said during the debate on the preparation of the informal European Council at the plenary session of the European Parliament: “The Greek people have voted democratically and we respect their vote. But they have elected a new government, not a new state. Mr. Tsipras must learn that.”
Mr. Weber underlined the need for Greece to continue on the path of structural reforms and budgetary consolidation to bring back jobs and growth.