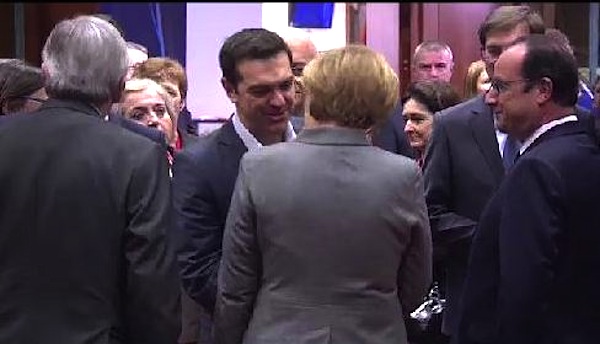 Greek Prime Minister Alexis Tsipras and German Chancellor Angela Merkel met for the first time in Brussels during the EU leaders summit. The Greek PM warmly shook Merkel’s hand right before the summit when French President Francois Hollande introduced them.
According to Greek TV station MEGA, Merkel congratulated Tsipras on his election. “I hope we will be able to cooperate, even though it seems difficult,” she said. “I hope so,” Tsipras replied.
Upon his arrival at the summit, Tsipras said he is convinced that “together we can find a mutually viable solution to heal the wounds of austerity, address the humanitarian crisis across the Union and bring Europe back to the path of social cohesion.”
Merkel: ‘Europe Always Aims to Compromise’
Before her meeting with Tsipras, the German Chancellor noted that she is looking forward to the meeting and plans on respecting the European Union tradition to always look for a compromise.
Furthermore, she warned that Europe’s success has always stemmed from each member-state’s respect for the institution and its rules.
“I would only say that Europe always aims to find a compromise, and that is the success of Europe… Germany is ready for that. However, it must also be said that Europe’s credibility naturally depends on us respecting rules and being reliable with each other,” she said. This was a clear warning for Tsipras, who is trying to end Greece’s bailout program and austerity measures.
“We will see what proposals the Greeks make. That will be discussed in the framework of the [Eurozone] Finance Ministers who meet again on Monday. So we have a few days’ time,” she told reporters outside the EU leaders summit in Brussels.