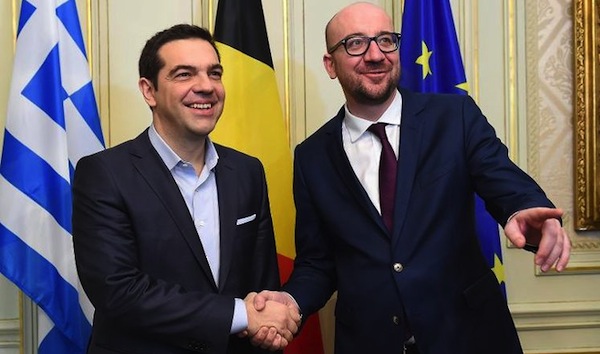 “Now is the time to change the policy mix and move forward to those reforms that up until yesterday the previous governments did not have the political will to advance,” Greek Prime Minister Alexis Tsipras on Thursday said after a “very constructive” meeting with Belgian Premier Charles Michel in Brussels.
“Now is the time to strike a decisive blow to tax evasion, tax avoidance, state patronage and corruption relations with the economic oligarchy,” Tsipras stressed.
According to the Greek Prime Minister, now is the time not only for Greece but for the rest of Europe to reinstate the development agenda in order to return to a social cohesion course, which is necessary for a common European future.
Tsipras welcomed the understanding that his Belgium counterpart showed for Greece’s positions and noted: “We are at critical crossroads for Europe and we must prove that Europe can bridge differences and find solutions, combining the principles of Democracy and popular verdict, and at the same time respect the laws and rules.”
Greece has gone through a painful fiscal adjustment in the last few years, which resulted in the reduction of big deficits and at the same time in the widening of social inequalities, Tsipras noted.
Through dialogue and cooperation we can bridge our differences and build a better future for our people, Tsipras concluded. Michel termed the meeting particularly positive and constructive, and expressed his country’s commitment to create conditions for growth in Europe.
The countries’ efforts to cut deficits should be accompanied by additional efforts for investments and a coordination of initiatives on a structural level, he noted. Michel said the talks that started on Wednesday between Greece and the Eurozone are important for the future of Greece as well as for the future of Europe and Belgium.
“We should work creatively in order to have prospects and stability, and each one should make his share of efforts for an agreement that respects everyone’s concerns,” he stressed. The situation is sensitive, difficult and takes determination to reach a solution, he concluded.
(source: ana-mpa)