GRNews
GreekReporter.comGreek NewsEconomyEurogroup Backstage: The Official Statement that Never Was

Eurogroup Backstage: The Official Statement that Never Was 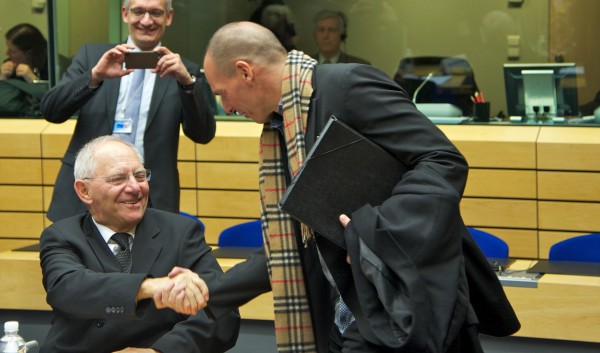 The Greek government vetoed the joint statement of euro zone finance ministers after Wednesday’s inconclusive talks on Greece’s bailout in Brussels, according to a Financial Times report.
According to officials involved in the talks, Greek Finance Minister Yanis Varoufakis had agreed to the joint statement. Greece’s Deputy Prime Minister Yiannis Dragasakis, who was also present, signed off the statement.
After the statement was agreed on, the meeting broke up and finance ministers started leaving the hall, including Germany’s Wolfgang Schaeuble.
However, the report says, Mr. Varoufakis, put a last-minute phone call to Athens and a government official vetoed the statement.
Peter Spiegel, the writer of the report, said he acquired the statement and incorporated it into his article:
“Today the Eurogroup took stock of the current situation in Greece and the state of the current adjustment program. In this context, the Eurogroup has engaged in an intensive dialogue with the new Greek authorities.
The Greek authorities have expressed their commitment to a broader and stronger reform process aimed at durably improving growth prospects. At the same time, the Greek authorities reiterated their unequivocal commitment to the financial obligations to all their creditors.
On this basis, we will now start technical work on the further assessment of Greece’s reform plans. The Greek authorities have agreed to work closely and constructively with the institutions to explore the possibilities for extending and successfully concluding the present program taking into account the new government’s plans.
If this is successful this will bridge the time for the Greek authorities and the Eurogroup to work on possible new contractual arrangements. We will continue our discussions at our next meeting on Monday 16 February.”
Mr. Spiegel posted the statement on his twitter account. That brought an almost immediate response from Mr. Varoufakis:

Analysts in Greece say that if indeed there was a veto from Prime Minister Alexis Tsipras, it was because of the phrase “The Greek authorities have agreed to… explore the possibilities for extending and successfully concluding the present program.” The new Greek government has drawn a red line on the extension of the existing bailout program.