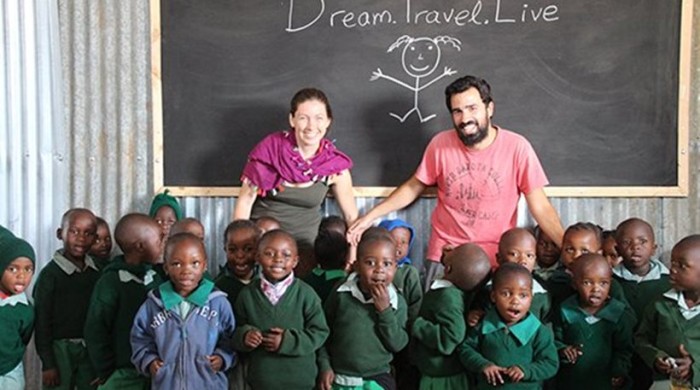 A documentary on two young Greeks who decided to record their humanitarian work around Africa, entitled “AfriQuest: Crossing Africa from Cape Town to Cairo” will be presented for the first time on Friday, February 13, at Booze Cooperativa in Athens, Greece.
The documentary follows Elpis Chrysovergis and Dora Bitsi in their six-month quest across 12 African countries. Starting from Cape Town and making their way to Cairo using just public transportation, the two young Greeks managed to complete five humanitarian projects.
Before embarking on their journey, Chrysovergis and Bitsi set up online funding campaigns through websites such as Indiegogo in order to cover the editing costs for their documentary and donate a significant part of the funds to three charity organizations: Qaqambani Safety Home in Khayelitsha Township, South Africa, Orphanage in Ethiopia and SANA, a non-profit organization in Tanzania.
In the end, their hard work paid off and they were able to provide help to orphanages and medical centers in South Africa, Tanzania and Ethiopia, build a school in Kenya and a well in Sudan, which gave 1,200 people access to clean water.
Along the way, they filmed their experiences, creating a unique documentary.
At the moment, the two young Greeks are planning a similar adventure in America. Their aim is to cross the continent from North to South and raise enough money to continue their humanitarian work.