Thousands of Pro-Government Demonstrators Rally in Front of Greek Parliament 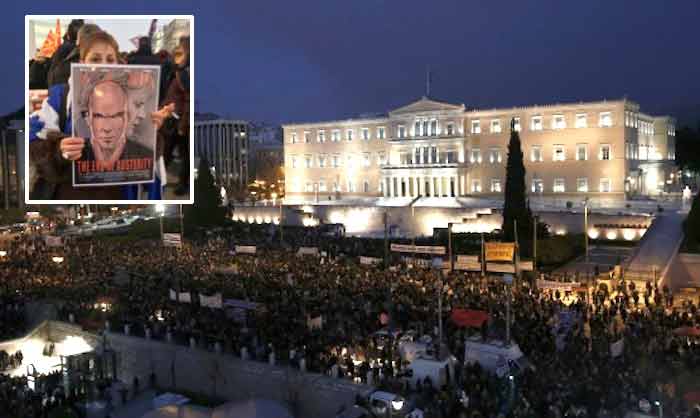 For yet another afternoon and despite the freezing cold and the light snow falling since yesterday, more that 10,000 Athenians gathered in front of the Greek Parliament at Syntagma Square in downtown Athens to express their support to the Greek government at the ongoing Eurogroup meeting held in Brussels, where Finance Minister Yanis Varoufakis, along with other state officials forming the negotiating delegation, is expected to present the country’s proposal for the Greek program’s future. The protesters’ main slogan in Athens, as well as in other major Greek cities is “Breath of dignity throughout Greece,” while the anti-austerity gatherings have been announced and organized during the last few days through Facebook.
This is the second pro-government and anti-austerity demonstration Athens sees in a period of six days, bringing back memories of the summer of 2011 when the Spanish-inspired movement of the “Indignados” attracted thousands of protestors rallying against austerity measures at the same square.
Once again, the protesters’ request was the abolition of the austerity policies imposed upon Greece. The crowd gathered in front of the Greek Parliament in support of the new anti-austerity SYRIZA-led government’s efforts to renegotiate the country’s international debt. The chants were mostly against German Chancellor Angela Merkel and Finance Minister Wolfgang Schaeuble. In addition, the protesters chanted also against the previous New Democracy-PASOK coalition government, as well as against Former Premier Antonis Samaras and Former government Vice President Evangelos Venizelos.
On the flip side, Greek Finance Minister Varoufakis, emerging lately as Greece’s new “super star,” was once again the protester’s favorite, along with Prime Minister Alexis Tsipras.
“On Thursday, we sent a first massive message against extortion. We continue. To take the baton and lift the gauntlet! It is time for the people to pick up the case of overturning on their backs. To stand up straight and send a unified message against austerity and Memorandums in favor of democracy and decency. Not to back down to the extortions of the Troika and their supporters in Greece – oligarchy, television channels. It is time for them to fear and hear our voice loud and clear. We choose dignity and ask for ourselves and for all the people of Europe a big breath of change. We invite all the people of Europe to actively show their support to the struggle of Greek people and the Greek government for a Europe of democracy and solidarity. We will win,” was, among others, declared in the demonstration’s declaration, calling people to hold a peaceful protest in Syntagma Square against the EU/ECB/IMF Troika.
Similarly, feisty and populous demonstrations were also held in Thessaloniki, Patras and other Greek cities as well as in Cyprus and a number of European capitals.
Google Maps: Demonstrations in support of Greece across the globe 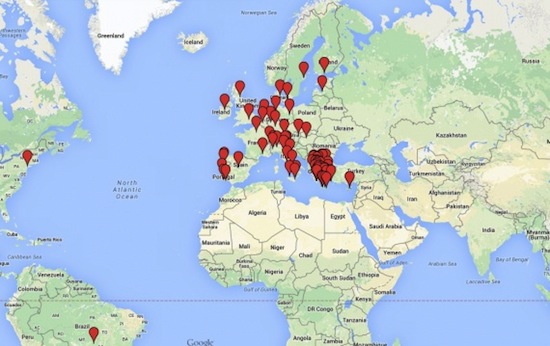 People across the globe demonstrate in support of Greece. Their motto is “Support the Greek people’s fight against deadly austerity.” Google Maps offers a map with all the demonstrations that will take place in various places across the world.
Click here.