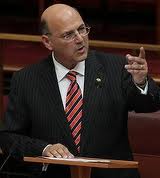 Greek-Australian Liberal senator Arthur Sinodinos may have supported a motion to spill Tony Abbott’s leadership at the Liberal Party, however he is now offering his help to the Australian Prime Minister.

Having served for ten years as director general in the office of Former Prime Minister John Howard -one of the longest-serving Prime Ministers in Australia- Sinodinos is now offering his help and knowledge to Abbott. Whether the offer will be accepted by the Australian Prime Minister remains a mystery.

For now, after surviving the leadership vote that took place on Monday, February 9, Abbott has promised to carefully listen to Liberal Party members and improve his performance.

“The good government starts today,” he said at the Parliament after it was determined that the censure motion against him -submitted by the Labor Party- was not successful.

The Labor Party, however, appears to have achieved its goal, since Abbot’s leadership is currently being questioned. However, it appears that the Labor Party did not wish to overthrow Abbot because his place would be filled by Communications Minister Malcolm Turnbull who is considered one of the party’s most powerful opponents.