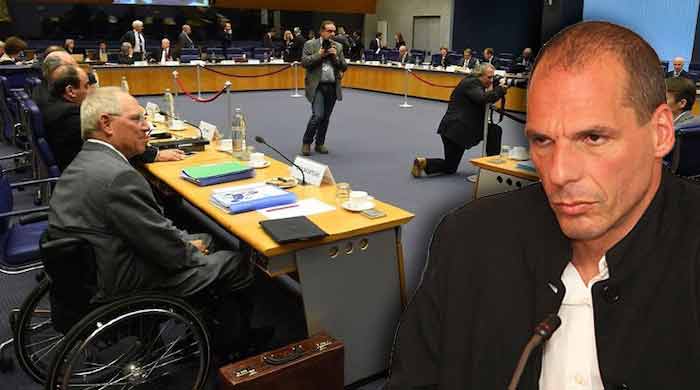 The end of the crisis will not come if Greece says yet another “yes” to the program. If the drug was bitter but effective we would have taken it, but the drug is “toxic” and even the doctor knows it but he does not change because of his commitments, Greek Finance Minister Yanis Varoufakis said earlier today while presenting his Ministry’s program in the Greek Parliament. The new “Czar” of the Greek economy appeared confident ahead of Wednesday’s emergency Eurogroup, during which the Greek program will be tabled. As Varoufakis highlighted, there will not be any more “yes man” nor a narrow-minded “no man,” but rather “citizens who know how to defend the European interest by standing up against policies that may be the common ones but are currently inflicting on Europe and Democracy.”

The Greek Finance Minister prologued a transitional deal, which will be enforced until the end of August instead of the end of May as it was originally planned, and is to be presented by the Greek government on Wednesday’s meeting of the Eurozone member-states’ Finance Ministers. Furthermore, the Greek proposal, which will be presented at the Eurogroup, aims to a -relatively low- 1.5% primary surplus of the country’s GDP, similar to the one achieved in 2014, but will buy the government time for a wider debt renegotiation. In addition, 70% of the outstanding and already agreed measures will be implemented, while the remaining 30% of reforms will be replaced by 10 measures derived from Athens’ proposal, focusing on growth and social restoration.

In detail, the Greek proposal is based on four basic axes that will restore both the troubled Greek economy and social fairness. The four axes include:

At the same time though, and according to The Financial Times, the Greek decision to end its EU/ECB/IMF bailout program is concerning the financial markets and Eurozone capitals, raising questions on whether Athens will secure financing without the official support. The reaction was particularly sharp in the capital markets, with the cost of insuring Greek debt against default jumping to its highest level since the “Grexit” fears peaked in 2012. Greece’s three-year borrowing costs jumped above 21%, also the highest since 2012, and the Athens stock market fell more than 6%, the newspaper reported.

Commenting on Greek Prime Minister Alexis Tsipras’ announcement to withdraw from the bailout agreement, German Finance Minister Wolfgang Schaeuble declared self-worried regarding the impact such a move will have on the financial markets. “I would not know how financial markets will handle it, without a program, but maybe he knows better,” he characteristically said while addressing reporters at a G20 Ministers meeting in Istanbul, only to add that “we have never forced anyone into a program. I am ready for any kind of help, but if my help is not wanted, that is fine.”

On his behalf, European Commission President Jean-Claude Juncker, who is considered an enemy of the Grexit scenarios, also appeared cautious during a visit in Germany: “Greece should not assume that the general feeling in Europe has changed so much that the Eurozone would accept the Tsipras government program without any limitations.”