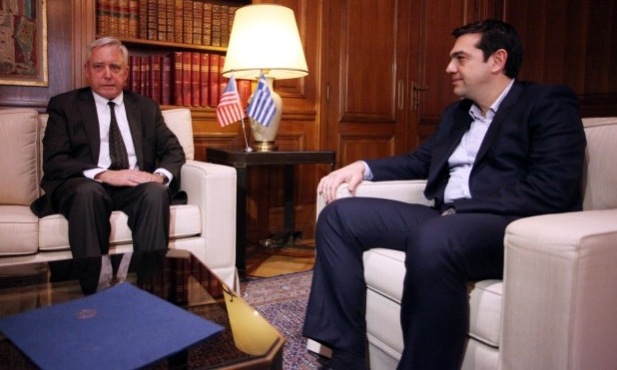 In meetings with Greek Prime Minister Alexis Tsipras and members of the Greek government, U.S. Ambassador to Greece David D. Pearce said the United States “believes that it is very important for the Greek government to work cooperatively with its European colleagues, as well as with the IMF,” a U.S. embassy press release said.
He also reiterated that the “United States wants to see Greece emerge from its prolonged economic crisis and continue to play a stabilizing role in the region.”
In his talks with the Greek government, Pearce recognized “the significant sacrifices that have already been made by the Greek people, while also reaffirming the United States’ position that Greece should continue to make administrative and structural reforms and exercise fiscal prudence. At the same time, in the view of the United States, Greece must make reforms that make foreign investment in Greece more attractive so the country can meet its international obligations and return to prosperity,” the announcement said.
Ambassador Pearce made special mention of the “close bilateral relationship between the United States and Greece and the important defense and security partnership between the two nations,” as well as expressing appreciation for Greece’s contributions to stability in the Mediterranean region and to NATO.
In the last two days, the U.S. Ambassador had meetings with the prime minister, government Vice-President Yiannis Dragasakis, Foreign Minister Nikos Kotzias, Economy, Infrastructure, Shipping and Tourism Minister George Stathakis and Finance Minister Yanis Varoufakis. During his meeting with the government’s economic and finance team they were joined by Deputy Assistant Secretary Daleep Singh from the U.S. Department of Treasury, who was in Athens to meet them.
(source: ana-mpa)