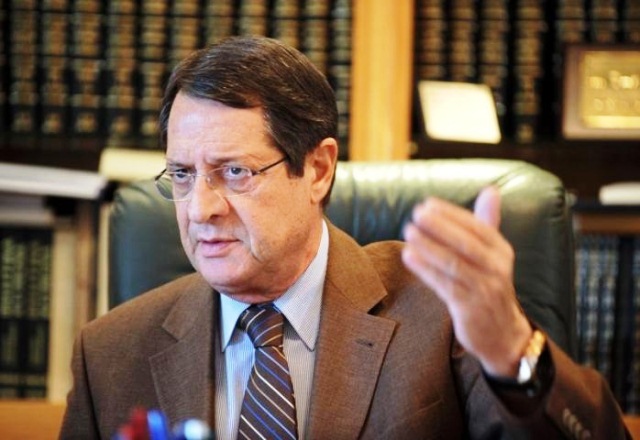 President of the Republic of Cyprus Nicos Anastasiades once again urged the Turkish side to cooperate with the island’s legitimate authority in order to turn Cyprus into a modern European country. In an interview with Turkish and Turkish-Cypriot media held at Nicosia’s Presidential Palce, Anastasiades highlighted that “there is only one plan, solving the Cyprus problem and reuniting Cyprus, on the basis of all that has been agreed as a compromise,” adding that “Cyprus and its citizens deserve much more than a divided country.”

As he explained, this can only be achieved if Cyprus is evolved into a bicommunal and bizonal federation, with political equality as this is defined by the relevant United Nations’ resolutions and other High Level acts, with a single sovereignty, legal personality and citizenship. As he further said, he does not aim to engage on a blame game, referring to the events before the bicommunal talks suspension in October 2014. He explained that just six days before the agreed assumption of talks between the two sides, Turkey, without any reason and with the pretext of protecting Turkish-Cypriot interests, issued its notorious Navigational Telex (NAVTEX) for conducting research in Cyprus’ Exclusive Economic Zone (EEZ),” violating the Republic’s sovereign rights and international law, by sending its seismic vessel “Barbaros,” accompanied by Turkish Navy ships to undergo natural resources research in areas licensed to European and multinational oil companies.

Cyprus, a European Union member since 2004, has been violently divided since 1974, after a brutal Turkish invasion and the following occupation of its northern lands or 37% of its territory. On its part, Turkey has repeatedly denied to recognize the Republic of Cyprus, despite numerous calls by international institutions and the European Union, which Ankara aims to join. At the same time, numerous United Nations-backed negotiations to reunite the island under a federal government have failed.