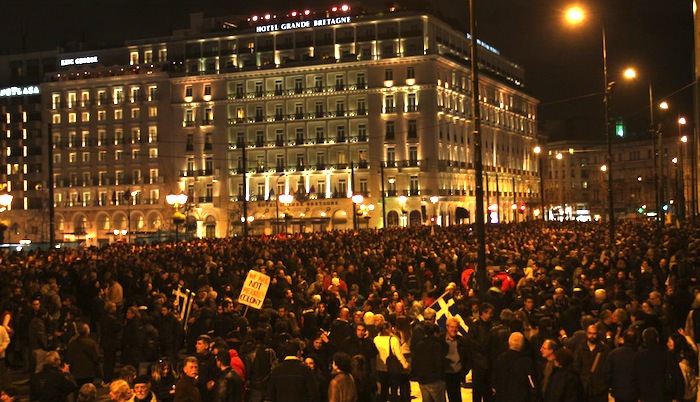 A demonstration largely different from those Athens has seen in recent years took place today in downtown Athens’ Syntagma Square. The rally was called for 6.00 pm and was organized through social media. It was the first pro-government demonstration organized in Greece in recent years. Four years ago, in summer 2011 the Spanish-inspired movement of the “Indignados” attracted thousands of protestors rallying against austerity measures in the same square. 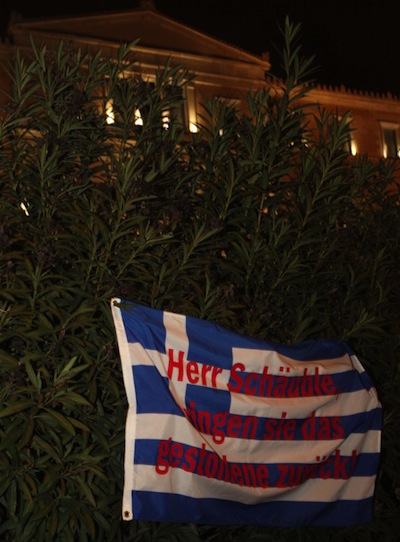 Once again, the protestors’ request was the abolition of the austerity policies imposed upon Greece. The crowds gathered in front of the Greek Parliament in support of the new anti-austerity SYRIZA-led government’s efforts to renegotiate the country’s international debt. The chants were mostly against German Chancellor Angela Merkel and Finance Minister Wolfgang Schaeuble, who earlier today met with his Greek counterpart in Berlin. Apparently, the two Ministers did not come to an agreement regarding the Greek bailout program’s future.

On the opposite, Greek Finance Minister Yanis Varoufakis, emerging lately as Greece’s new “super star,” was the protestor’s favorite along with Prime Minister Alexis Tsipras.

“European Central Bank (ECB) President Draghi chose to play Merkel’s game again and blackmail the Greek people and the new Greek government,” was, among others, declared in the demonstration’s declaration, calling people to hold a peaceful protest in Syntagma Square against ECB’s decision not to accept Greek bonds as loan collateral.

It should be noted that police presence was null and it was the first time protestors could even reach the Tomb of the Unknown Soldier and the stairs leading to the Greek Parliament, as the iron fence that was installed there for years has been removed by the new government. Similar peaceful demonstrations were held in other major Greek cities.