Greece Reacts to ECB Decision to Not Accept Greek Bonds 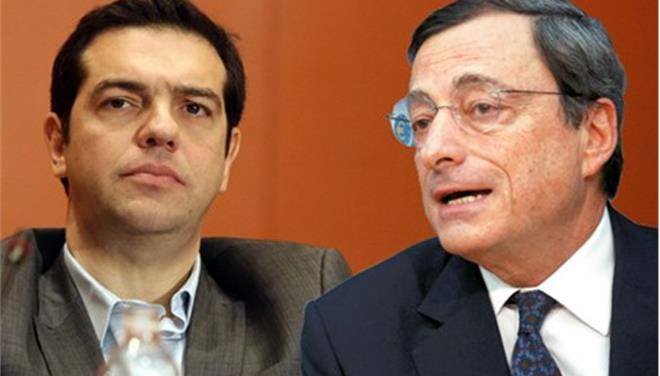 The Greek government reacted to the European Central Bank‘s decision to stop accepting Greek bonds as collateral for its liquidity operations on February 11 and Athens announced that it will stay true to the popular mandate and will not back down.
The announcement from Maximos Mansion was that, “the Greek Republic will not blackmail and it will not be blackmailed.”
Meanwhile, the Bank of Greece announced that ECB’s decision to stop accepting Greek bonds as collateral will not affect the liquidity of the Greek banking system supported by the emergency liquidity assistance tool (ELA).
At the Maximos Mansion they believe that the sudden ECB decision and the announcement by Mario Draghi is a tool of political pressure, or an indirect warning from Berlin, hours before the crucial meeting between Greek Finance Minister Yanis Varoufakis and his German counterpart Wolfgang Schaeuble.
Mario Draghi is believed to have put pressure on the Greek side to accept the immediate return of the troika of international lenders and to complete the evaluation of the Greek economy, which is seen as a message from Germany that the Greek government can now submit proposals on the existing financial assistance program.
Analysts believe that the ECB practice is an indirect expression of dissatisfaction on the part of Mario Draghi after he heard Greece’s position on the debt issue in his meeting with Finance Minister Yanis Varoufakis, only a few hours before ECB’s announcement.
The reaction of the Greek side took the form, initially, of an official announcement by the Ministry of Finance, which emphasized that “the Greek banking system remains adequately capitalized and fully protected through access to the ELA.”
According to associates of the Greek premier, Mario Draghi contacted Alexis Tsipras once he returned to Athens and informed him of the decision of the ECB. As noted by the same sources, the ECB president told the Greek prime minister that the decision will not affect the Greek financial system as liquidity to Greek banks will be renewed through the ELA. Alexis Tsipras told Mario Draghi that he is bound to the recent popular mandate and will continue to seek agreement with Greece’s European partners.