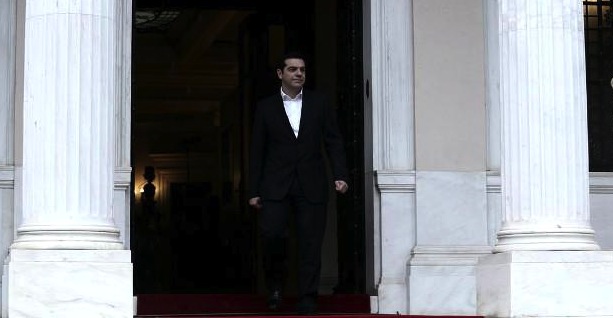 After the barrage of first meetings with European partners’ representatives this week, the Greek government is now preparing for Prime Minister Alexis Tsipras’ upcoming visits to Paris and Brussels that will take place next week.
In order to evaluate these first meetings and more specifically the ones with European Parliament President Martin Schulz and Eurogroup President Jeroen Dijsselbloem, a three-hour meeting was held yesterday at the government headquarters under Tsipras and with the participation of the cabinet’s financial staff, including Deputy Prime Minister Giannis Dragasakis and Finance Minister Giannis Varoufakis.
Shortly after midnight and while the meeting was completed, government sources highlighted that at the end of the day the outcome was positive for the newly elected government, which will continue to seek a viable solution both for Greece and for Europe.
The Greek Premier is about to hold consecutive meetings with European counterparts, aiming to communicate the government’s consistent positions, declaring that in any case the new government is willing to remain steady on its commitments to the Greek people and their fresh mandate to do so. “We will not lose the people’s support,” Tsipras said and this will be a central point in his upcoming moves while meeting European political leaders.
Specifically, on Tuesday, February 3, the Greek Premier is scheduled to meet with his Italian counterpart, Matteo Renzi, in Rome, just one day after his first official visit abroad, in Nicosia. On Wednesday, he is expected to travel to Paris where he will meet with French President Francois Hollande, while after that he will go to Brussels and meet with European Commission President Jean-Claude Juncker.
French Agriculture Minister Stephane Le Foll, commenting on Tsipras’ upcoming visit to Paris, said that he expects a discussion in a “comprehensive manner” in all aspects raised by the Greek side, including growth and debt issues, which will be examined in depth. “France is prepared to discuss, negotiate and engage in a dialogue that will allow us to find solutions,” although, as he pointed out, “there will not be discussions related to the removal of the Greek debt.”
On his behalf, the French President has already stated that “the commitments which have been undertaken by the Greek state must be respected.”