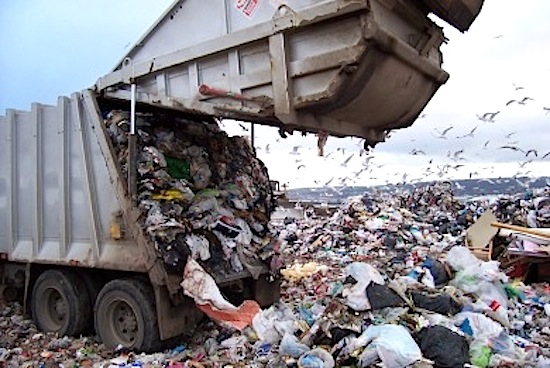 The executive committee of the Regional Authority of Attiki solid waste management body, EDSNA, on Friday canceled a decision to transport 4,000 tons of waste from the town of Tripolis in Peloponnese, southern Greece, to the Fyli sanitary landfill in Athens.
According to the EDSNA executive committee decision, the responsibility for the Tripolis waste management belongs to the municipality itself and the Regional Authority of Peloponnese that should have taken action years ago to solve this serious problem.
The canceled decision for the waste transport was made on January 28 by the general secretaries of Decentralized Administration of Attiki and Peloponnese, one day before the resignation of General Secretary of the Decentralized Administration of Attiki Manolis Angelakas. The decision allowed the municipality of Tripolis to gradually transport 4,000 tons of waste to the Fyli sanitary landfill by the end of April.
The garbage piling up on the streets of the municipality of Tripolis led the general secretary of the Decentralized Administration of Peloponnese to declare the region in a state of emergency on January 13.
(source: ana-mpa)

A Greek student in the Italian city of Turin has sustained serious injuries after her former boyfriend stabbed her in the neck and chest.
Animals