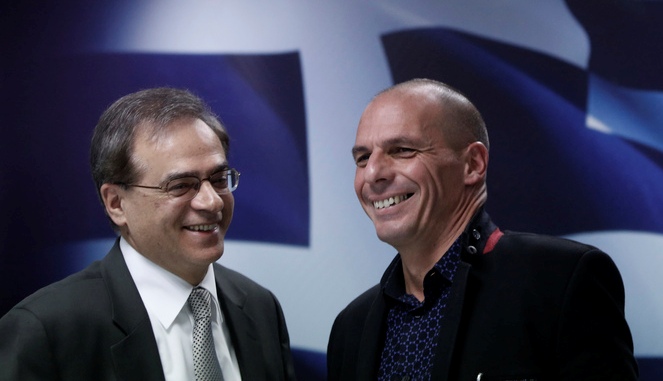 A chance to preface the policy he intents to apply as Greece’s new Finance Minister had earlier today Giannis Varoufakis in the ceremony assuming his duties. While in the Greek government’s financial headquarters, Varoufakis exchanged opinions with his predecessor, Gikas Hardouvelis, and referred to the “frugal” lifestyle of the past that made Greeks creative and kept them away from unnecessary loans and credit cards.

“We are turning page. A massive toxic mistake was born in this building,” Varoufakis underlined, referring to the largest loan in human history and the Greek debt. “We knew that the old policy will not have a happy ending, but I am sure that Mr. Hardouvelis is not responsible for it. The program had already been written since 2010,” he said. Furthermore, he mentioned the money European people lend to Greece, saying that “Slovaks gave money, which were apparently thrown in a black hole. This will not happen again.”

“We are in favor of a frugal lifestyle. What is the necessity of so many Porsche Cayennes in the narrow streets of Athens? Greeks were more creative when they lived frugally, without loans and credit cards,” he highlighted. During the handover ceremony, Varoufakis said the government will pursue a new agreement with the Troika of Greece’s creditors, to replace the old one. In the meantime, a temporary agreement must be made and this is the Greek government’s first priority, he explained. “We must deconstruct the narrative of a ‘duel’ between Greece and its creditors, in order to deconstruct the climate of insecurity,” he concluded.