Greece's New Govt Sworn-in With Both Religious and Civil Ceremonies 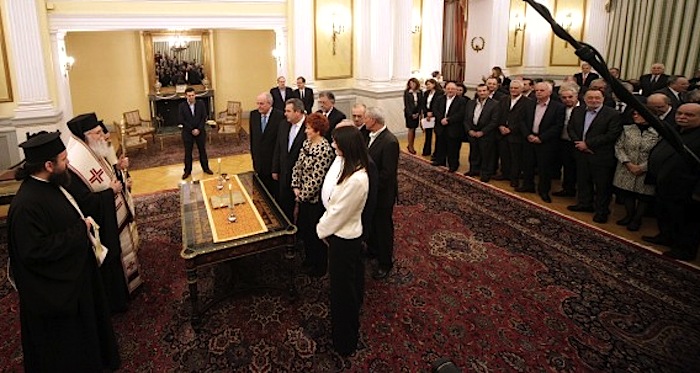 The members of the new Greek cabinet were sworn-in earlier today in the presence of the President of the Hellenic Republic, Karolos Papoulias, at the Presidential Palace in downtown Athens, Greece . The new cabinet consists of 40 Ministers, Deputy Ministers and Vice Ministers, five of whom originate from the governmental partner, Independent Greeks (ANEL).

It should be noted that after the new Prime Minister’s, Alexis Tsipras, civil oath yesterday, for the first time today, the majority of cabinet members were sworn-in with a civil ceremony, while only eight – mostly the ones from ANEL – in a religious one. In addition, four cabinet members were not sworn-in today as they were not in Athens. Among them is Justice, Transparency and Human Rights Minister Nikos Paraskevopoulos.

Earlier today, the cabinet announcement was preceded by extended negotiations between the Prime Minister’s associates and those candidate for the Ministerial seats. Tsipras’ intention was to achieve balance and power relationships within the newly formed government but also send a clear message to Greek society regarding the change in the country’s central political scene.

One of the five ANEL members that was considered “locked” for a cabinet seat was Nikos Nikolopoulos but his candidacy was turned down by numerous SYRIZA members, most likely due to his homophobic attack against Luxembourg’s Prime Minister, Xavier Bettel, last August when he was an independent MP. ANEL’s Panagiotis Sgouridis was the one chosen to replace Nikolopoulos. He was appointed as Production Reconstruction, Environment and Energy Vice Minister.

Moreover, negotiations regarding the Justice, Transparency and Human Rights Ministry lasted until a few minutes before the cabinet’s announcement. Giannis Panousis, Panagiotis Nikoloudis and DIMAR leader Fotis Kouvelis were the main candidates for the Ministerial seat. Finally, Nikos Paraskevopoulos was appointed as Justice Minister.