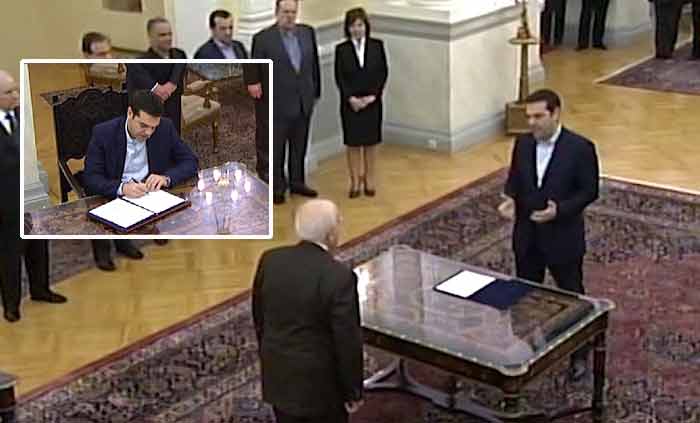 SYRIZA leader and new Greek Prime Minister Alexis Tsipras took an oath of honor and conscience and not a religious oath in his swearing-in ceremony at Maximos Mansion, Greece , at 4 p.m. today.
This is the first time a Greek politician is not swearing to the holy cross, as the Christian Orthodox custom dictates. Tsipras is also the youngest Greek PM in history.
The leftist party chief has often stated that he doesn’t like to adhere to social conventions or follow Christian Orthodox customs. He is not married to his partner of over 20 years as they chose to cohabit. Also, he has not baptized neither of his two sons. Tsipras and his partner Peristera (Betty) Baziana preferred to name their two sons in a simple town hall naming ceremony.
Tsipras has been criticized for hypocrisy regarding his stance to religion. In the past he has kissed the holy cross in ceremonies. In the January 6th Epiphany celebration, he followed the custom of releasing a white dove. He has also visited the Mount Athos monastery and other monasteries and church charities as well.

Successful Greek-Americans from all across the West Coast are being featured in a new YouTube series titled "Learn From the Greeks".
Ancient Greece

Found with a metal detector in his hand, a 68-year old man was arrested on Sunday for illegally excavating in the archaeological site of Amphipolis.
Diaspora