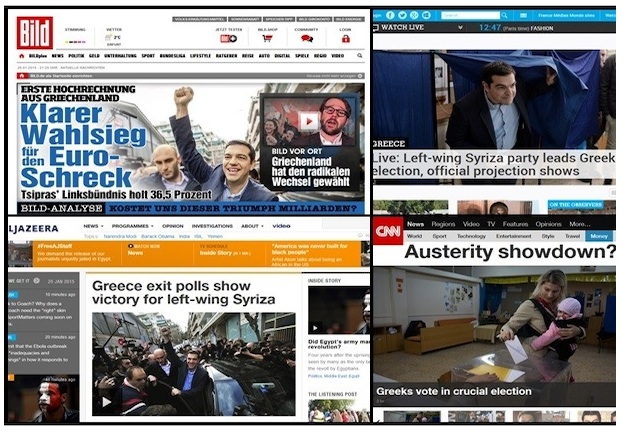 SYRIZA’s win at the Greek elections of January 2015 has made it to the front cover of several large and small international news agencies. Others describe it as a “victory over austerity,” or a “historical victory for Greece ’s radical left wing.”
The front page titles show surprise, but also worry about the new Greek government. Most journalists express their worry in regards to what this victory will mean for the country’s future but mainly for the Eurozone and European Union.
“Greece sent shockwaves across Europe last night as a radical left-wing party that has promised to end austerity and refuse to take orders from Berlin and Brussels triumphed in the country’s election,” wrote the British newspaper The Times. Meanwhile, Tsipras was described as a “firebrand” leading the “first of a new wave of anti-cutback parties.”
Meanwhile, British The Guardian noted that the result surpassed poll predictions, marginalizing the two parties that have run the country since the military junta fall in 1974. “The damning popular verdict on Europe’s response to financial meltdown is a haunting outcome for the EU’s political elite. For the first time, power has been handed to populist outsiders deeply opposed to Brussels and Berlin, albeit not anti-European, unlike their counterparts on the far right across the EU,” it stated.
The Financial Times stressed that Greece’s new government will receive intense pressure from international creditors in order to respect the commitments of its predecessors. “In what was Greece’s third general election since May 2012, voters turned to Syriza in frustration at mainstream center-left, center-right and technocratic governments that presided over a six-year economic slump,” wrote the American newspaper.
The Greek election results were also featured on the front cover of the British METRO, the Daily Telegraph and the BBC, the International New York Times, the Italian Il Giornale and Il Manifesto, the French Liberation and German newspapers such as Die Welt.