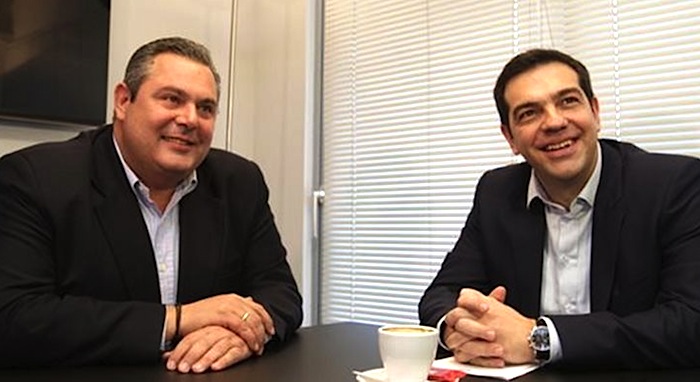 SYRIZA leader Alexis Tsipras is practically the new Prime Minister of Greece spearheading a new coalition government formed by SYRIZA and Independent Greeks (ANEL).
At 11.30 a.m. local time Panos Kammenos announced publicly his support and partnership in the new coalition governmentadding “Prime Minister Alexis Tsipras will announce more details this afternoon.”
The SYRIZA leader, along with Independent Greeks leader Panos Kammenos, campaigned on anti-austerity promises and reversing Troika measures that the Samaras government had undertaken to satisfy European and international lenders.
SYRIZA is now the primary political power in Greece, but without majority control of the parliament they need another party’s support. The new Greek coalition government will have 162 total of the 300 that is the total number of the Greek parliament MPs.
Alexis Tsipras is expected to visit Greek President Karolos Papoulias at 3.30 pm.