TechNews
GreekReporter.com Greece Samaras: 'I Hand Over a Country Without Deficits, My Conscience Is Clear'

Samaras: 'I Hand Over a Country Without Deficits, My Conscience Is Clear' 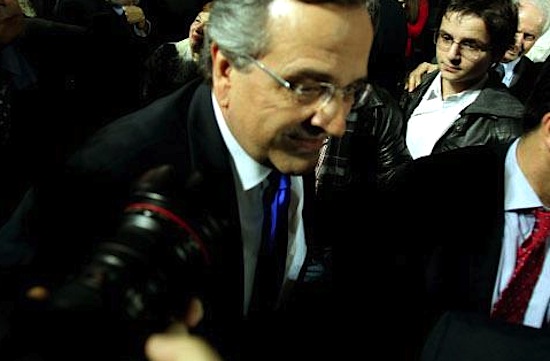 “The Greek people have spoken and we all respect their decision,” outgoing Prime Minister of Greece Antonis Samaras said on Sunday, in statements at Zappion building press center after his party’s defeat in the Greek national elections.
“My conscience is clear. I took over a country on the verge of disaster. We withstood, we averted the worst, we pulled the country out of the recession and deficits, we laid the foundations for growth and an exit from the crisis. We created a new tradition of consensus and coalition governments.”
“Today I hand over a country without deficits, which is emerging from the crisis in an orderly way, is a member of the European Union and the euro. I hope that the next government will preserve these gains. I have a clear conscience because I told the truth to the people, right to the end. I hope that my predictions are not proved true,” the outgoing Premier said.
Referring to the election result, he said that “it is not pleasant, but New Democracy withstood and is on its feet, despite the very difficult measures that we were forced to take. It seems that New Democracy has lost only two points in relation to 2012 and remains ready to play a role as a guarantor of European stability, security and reforms. Its role will be crucial. I guarantee that it will play this role to the utmost,” he said.
(source: ana-mpa)

Greece Crushes the US in Water Polo, Qualifies to Quarter-finals