The History of the Drachma 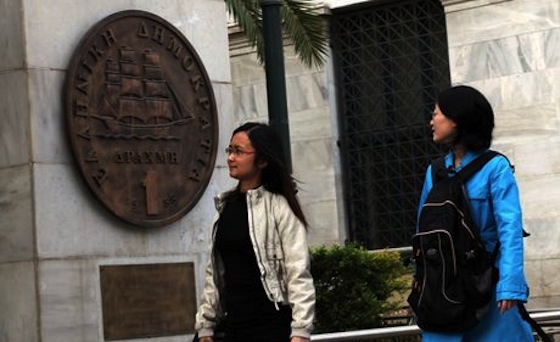 In the past few weeks, the word “Grexit” plays daily in international media. A few days before Sunday’s pivotal elections, that most likely will bring the first left-wing government in Greece, the drachma is back on the lips of many Greeks.
The drachma as a monetary unit goes back to 500 B.C. It is one of the oldest currencies in the world. In ancient times, there were periods when it was the most widely used currency across a large part of the world.
Etymologically, the word drachma derives from the verb “drattw” (δράττω) which means “grasp a handful.” Initially, it referred to a handful of six iron rods called obols which were used as currency before the use of coins, experts at Athens Numismatic Museum said.
The 5th century B.C. Athenian coin, which became the most important denomination and inspired several future versions, was the tetradrachm, equivalent to four drachmas. The coin featured the profile of goddess of wisdom Athena on one side and on the other an olive branch and an owl — a symbol of wisdom and a nocturnal bird which can see things people can’t.
In the following centuries, the drachma gradually developed into an “international” means of payment in the entire Mediterranean basin. It was the first time in monetary history that a coin was used in such a large area of distribution. It circulated as far as India, as a result of the conquests of Alexander the Great.
However, in later times, when foreign invaders took over Greece and ruled the country for centuries, the drachma disappeared from use.
The drachma was reintroduced to Greece as national currency in 1832, when the country won its independence from Ottoman rule. The new coin carried a portrait of King Otto, modern Greece’s first king. The modern drachma never came close to the prestige of the ancient currency.
The new currency joined the Latin Monetary Union in 1868. It was an experiment launched by France which ended with World War I. By 1893, Greece had already witnessed a national bankruptcy due to over-borrowing and over-spending.
The worst period for the modern drachma was World War II. During the Nazi occupation of Greece and amidst unprecedented hyperinflation, Greeks were struggling to survive with 100 billion drachma notes in their pockets, economist Yorgos Komarinos said.
The post-war drachma coins and paper bank notes issued by the central Bank of Greece also suffered from high inflation. In 1954, in an effort to halt inflation, the country joined the Bretton Woods fixed currency system until it was abolished in 1973.
In 1954, about 30 drachmas equaled 1 U.S. dollar. It remained so for 20 years. From 1974 onwards, it devalued over the following three decades to about 400 drachmas to 1 U.S. dollar.
At the turn of the millennium, Greece joined the new attempt to create an international unit of exchange. On Jan. 1, 2002, the Greek drachma was officially replaced as the circulating currency by the euro. The exchange rate was fixed at 340.75 drachmas to 1 euro.