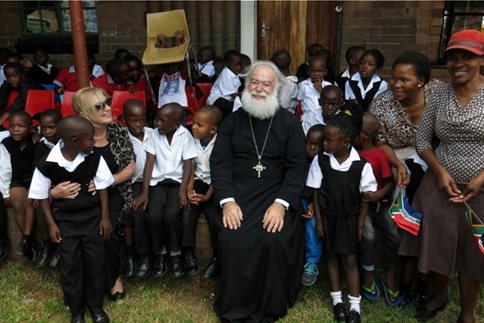 Over 200 students from Jabavu East Primary School in Johannesburg, South Africa, waved Greek and South African flags, and sang the national anthems of Greece and their country, welcoming Patriarch Theodoros of Alexandria and All Africa.

Jabavu East Primary School has established a Greek language learning program for the last 20 years under the direction of teacher Ava Papatheofilou.

A celebration followed were the children expressed their excitement, singing, dancing and reciting poems for Patriarch Theodoros in their native as well as the Greek language.

The Patriarch of Alexandria and all Africa expressed his admiration and joy for Papatheofilou’s effort in teaching Greek to students. He also requested that the students attend their courses in order to cultivate the knowledge that their teacher offers them and never forget that they are the future of South Africa.

As the patriarch noted, these are the children of Nelson Mandela, a man who fought for freedom, love and dignity.

Meanwhile, Patriarch Theodoros also delivered a speech during an event organized in his honor at the metropolis of Johannesburg and Pretoria, to mark the 10-year anniversary since its establishment.