GRNews
GreekReporter.comGreek NewsEconomyGerman Chancellor Merkel: We Aim to Keep Greece in the Eurozone

German Chancellor Merkel: We Aim to Keep Greece in the Eurozone 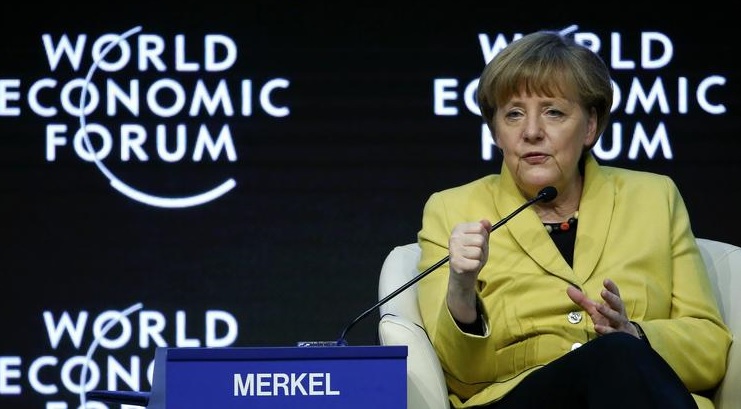 Speaking at the World Economic Forum in Davos, Switzerland, yesterday, German Chancellor Angela Merkel appeared confident that Greece will continue on the road of responsibility concerning its agreements with the country’s European partners.
“We hear from Greece that the vast majority of Greeks want to keep the country in the euro and since beginning of the crisis I have always said that everything we do politically aims to keep Greece in the Eurozone,” the German Chancellor said. Although, as she emphasized: “We must show solidarity and will continue to do so with the readiness to take on the same responsibility. I am convinced that Greece will continue to show this sense of responsibility.”
Regarding the upcoming Greek elections, Merkel underlined that these two elements are necessary. “What will happen after the election is something we will discuss then. The experience of the crisis shows that we always find a European solution based on these two sides of the coin: solidarity and responsibility,” she said.
Commenting on the European Central Bank’s (ECB) decision to launch an expanded program of asset purchases, which will include existing programs for abs and covered bonds amounting 60 billion euros per month (some one trillion euros in total), the European Union’s “Iron Lady” pointed out that it should not make us deviate from the fact that, as politicians, we need to establish the necessary framework and conditions for recovery. ECB’s decision was taken by absolute independence, she added. Although, Merkel concluded that being more rigorous in actions and structural reforms is a necessity. “What will happen when interest rates start to go up again? Now is the time for one to put ones fiscal situation in order,” she concluded.