GRNews
GreekReporter.comGreeceSYRIZA Leader to Greek Voters: Give Us a Self-Reliance Mandate

SYRIZA Leader to Greek Voters: Give Us a Self-Reliance Mandate 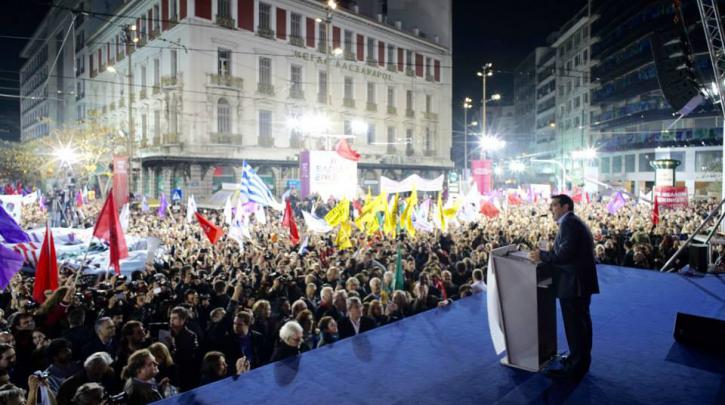 Greek main opposition SYRIZA leader Alexis Tsipras delivered his main speech in Omonoia Square, downtown Athens, ahead of the upcoming January 25 general elections. Addressing an audience of thousands of SYRIZA supporters, Tsipras appeared confident that his party will be victorious after the polls close on Sunday, while he requested a self-reliance mandate from Greek voters in order to form a strong government. In addition, the main opposition leader directly attacked Prime Minister Antonis Samaras and his policies.
Tsipras opened his speech by saying that Greece will not only have a SYRIZA victory on Sunday, but a historic triumph of the people “who will defeat fear and pain. Who will punish its terrified terrorists.” Furthermore, Tsipras referred to a page break and a change of an era.
“No matter what you were voting until yesterday; [We proceed] all together, to roll up the sun again over Greece. The sun of justice, the sun of democracy, the sun of dignity. All together, because poverty does not discriminate. Unemployment does not discriminate. Despair does not discriminate. ‘Padlocks’ do not discriminate. All together, because united people cannot be defeated.”
Furthermore, Tsipras declared that his party will not accept receiving instructions from abroad, referring specifically to German Chancellor Angela Merkel. “We do not intend to form a coalition with the Memoranda representatives. Neither the old nor the new ones,” he highlighted, referring to minor parties. “This is why we ask you to determine the next day terms. Give us your vote for stability. Give us the power to help Greece take off. Give SYRIZA and Greece self-governance to escape the past of corruption, subordination and destructive Memoranda.”