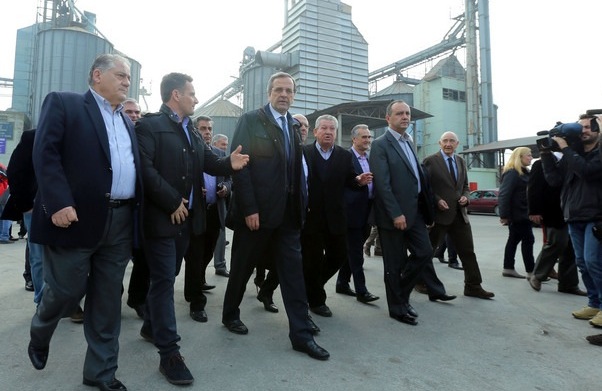 The compensation to Greek farmers and peach growers for the Russian embargo damages will be signed on Wednesday, Prime Minister and New Democracy leader Antonis Samaras said during his visit to a modern cattle breeding unit in Sindos, Thessaloniki, Greece.
However, Samaras warned about the danger of an accident if citizens choose to clash with the EU by casting their vote to SYRIZA.
On the European funds he said: “People must be aware that this money is mostly EU money and for this reason there must be a close and intrinsic relation with the EU. If we choose to clash, then the accident that we do not want to happen, will happen. We deeply believe that the Greek farmer, who has shown trust to the growth that the country’s participation in the EU has offered, will support us in order to avoid such an accident. Because if something wrong happens with the Common Agricultural Policy (CAP) and the National Strategic Reference Framework (NSRF), growth will not come.”
The Premier underlined that the settlement regarding the overdue debt, the municipalities’ authorization to manage CAP funds and the decentralization gave a “breather” to the local administration and work has been done.
While in the town of Sindos, he also held talks with representatives of sugar beet farmers. In statements to the Athens-Macedonian News Agency, the head of the Serres sugar beet exporters union, Christos Varoutis, said that they had raised the issue of 18 million euros of outstanding payments owed to sugar beet farmers by the Hellenic Sugar Industry.
“Mr. Samaras spoke on the phone with members of the government and technocrats on the spot, asking them to settle the debt issue within the day,” Varoutis said.
Varoutis noted that he was tentatively optimistic, adding that sugar beet farmers will continue occupying the Hellenic Sugar Industry main offices, which they occupied in protest last Thursday, and that a delegation of farmers will be in Thessaloniki where the Prime Minister is scheduled to deliver a speech.
Samaras will address his party’s main pre-election rally on Wednesday at 7:00 pm, at the Thessaloniki International Fair (TIF) congress center.
(source: ana-mpa)