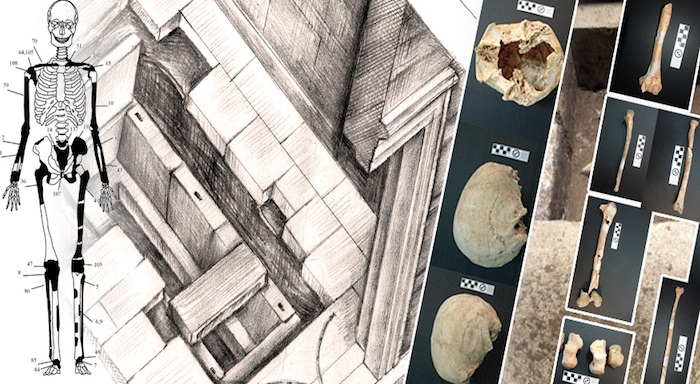 The search for the identity of the buried in the Amphipolis tomb, Greece, has led archaeologists and historians to create new scenarios, with family ties between the five dead being one of them.
However, historians speculate that the 60-year-old female is most likely Olympias, mother of Alexander the Great; the two adult male bodies are probably sons of King Cassander (305-297 B.C.), one of them was savagely murdered; the cremated body and the infant remain a mystery. It should be noted that Olympias died at the age of 59.
Also, ancient Macedonians did not bury their dead together. According to the book “Burial Customs in Ancient Greek World” by Donna Kurtz and John Boardman, “During the Hellenistic period, the common man was satisfied with a simple sarcophagus, a cyst or tiled grave or urn. Important innovations are the monumental tombs of the rich and their families, which generally took the form of ornate chamber tombs or overhead mausoleums…. This was the age of the individual and for the first time we have ample evidence of faith in human immortality, while the case of Alexander and his successors clearly indicate participation in the divine nature of those dead who had means.”
Historians say that if indeed the woman in the grave is Olympias and the tomb was erected in her honor, then Macedonians not only violated their customs, but they also did something that seems absurd and unthinkable: They built one of the largest and most elaborate tombs of the known world for a woman, honoring her as a demigoddess or hero. This justifies the initial interpretation given to the monument by the excavators and Greece ‘s Ministry of Culture. Other archaeologists reject the Olympias scenario altogether, insisting that the mother of Alexander the Great is buried at Pydna, as indicated by an inscription there.
In an official statement issued by the Ministry of Culture, the chief researchers explain that the crucial microscopic study of the findings starts now, immediately after the first recognition of their basic characteristics. Therefore, no one can say with certainty who the five dead in the tomb were. Also, it is not certain that the five bodies were buried together, since there is a possibility that looters or vandals threw the skeletons together.
What is certain is that the female skeleton belongs to a 60-year-old woman. Olympias was stoned to death under orders of Cassander. So far, the anthropological examination of the female skeleton did not show any signs of hard blows.
In contrast, researchers have no doubt that the younger of the two male “brothers” was murdered, probably with a knife. If further study of skeletal residue confirms that the two men were blood related, then scientists can imply that, indeed, the two men in the grave are two of the sons of Cassander. Yet, historical sources of the period are incomplete. Even the ages of Cassander’s sons are disputed by some historians.