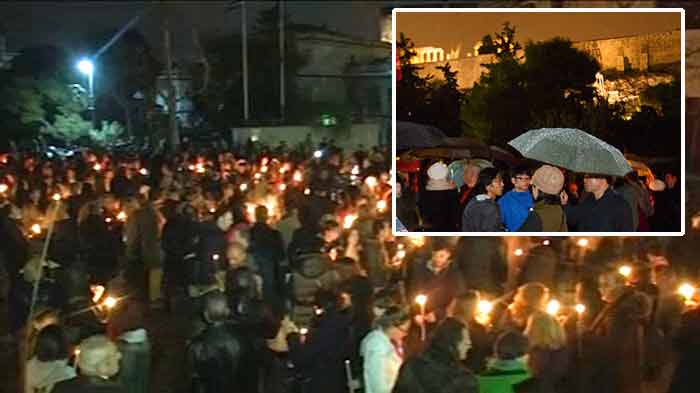 Despite the rain, hundreds of Greeks gathered outside the Acropolis Museum on Sunday to hold a candlelight vigil asking Britain for the return of the Parthenon sculptures.
The rally was organized by President of the Central Union of Greek Municipalities (KEDE) and Mayor of Maroussi George Patoulis and the Mayor of Marathon Elias Psinakis. It was an event that took place in several historic cities and municipalities throughout Greece.
The initiative was taken because the British Museum decided to loan a sculpture from the Parthenon marbles to St Petersburg’s Hermitage Museum for the celebrations of the museum’s 250th anniversary. It was the first time a Parthenon sculpture was removed from the British Museum. This caused an outrage in Greece that wants the marbles to return to their “home” in the new Acropolis Museum.
The time of the candlelight vigil was supposed to coincide with the time the aircraft carrying the sculpture from Russia back to Britain would pass over Greece.
The marble statues from the facade of the Parthenon have been the subject of bitter dispute since they were taken from Greece by the Earl of Elgin, Great Britain’s ambassador to the Ottoman Empire, after an agreement with the Turkish rulers of Greece at the time. The Earl of Elgin later sold the Parthenon sculptures to the British Museum, where the marbles have been exhibited ever since.
Efforts for the return of the precious masterpieces have started since 1830, when King Otto of recently liberated Greece demanded for the first time the sculptures to come back to Athens.

On April 10, 1826, the 10,500 Missolonghi inhabitants, after one year of siege, made the heroic "Exodus of Missolonghi"
Ancient Greece

Since the beginning of time, people have turned their eyes to the sky and discerned the shapes of animals and objects in the stars.