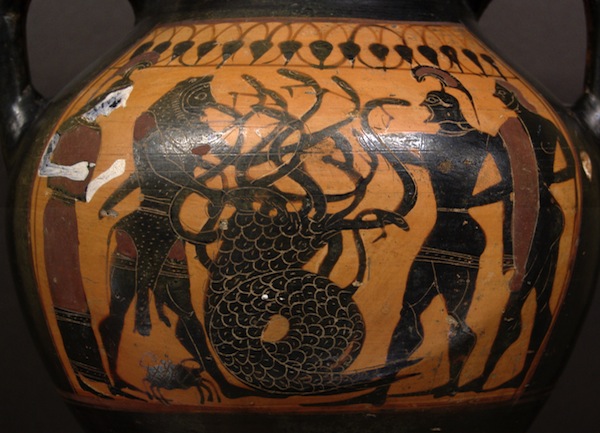 In an article titled “The fantastical beasts on ancient Greece,” published in its Culture section, BBC news website focused on a darker side of Greek art and more specifically on the fearsome creatures that were commonly depicted in it.

Although ancient Greeks are viewed as highly rational beings, having discovered democracy, philosophy and drama, no one can deny that supernatural beings and primal forces played an important role in their societies.

This is especially visible in their art, BBC argued, making specific reference to a wide range of fantastical creatures decorating all sorts of art objects from that time of Greek history.

Starting from fantastical animals, such as the griffins decorating the famous “Throne Room” in the Minoan palace at Knossos, Crete, and the leonine creatures above the impressive stone gate at the Mycenae site, the article goes on to mention other fascinating monsters, including Centaurs, gorgons, satyrs and sphinxes.

In regards to the attitude of Ancient Greeks toward these monsters, BBC noted that, although it is tempting to understand them in opposition to concepts of Greekness, i.e. as scary, “other” beings that needed to be shoved beyond the perimeters of civilization, perhaps things were not as simple as that.

“I don’t believe that Greeks really expected to meet a centaur or sphinx, or even a satyr, out in the countryside, and maybe they were always regarded as the stuff of legend. But a recurring trait of Greek art is that monstrous creatures seem to be held up as a foil to the Greeks’ concept of civilization – a sort of distorting mirror in which the Greeks could look at themselves,” noted Peter Stewart, director of the Classical Art Research Centre at the University of Oxford.

“The Greeks seem to have found these monstrous or semi-human creatures useful to explore and express their world-view, their ideas about humanity and civilization, the mortal and divine. Fantastical beings were part of the furniture of the Greek mind,” Stewart added.