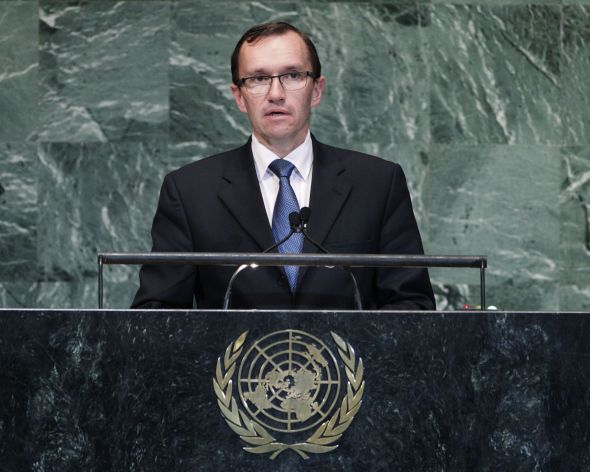 The United Nations Secretary General’s Special Adviser Espen Barth Eide has conceded on Wednesday that peace talks between Cyprus and Turkey are unlikely to resume in the near future.
After a meeting with Cyprus’ President Nicos Anastasiades, the Norwegian diplomat spoke to reporters and said, “We are not giving up…but right now there are no prospects for an immediate meeting [of the two leaders] and I think that will be true for quite a while.”
The UN official spoke with the leaders of Turkey and Cyprus. On Tuesday, Eide had met separately with Turkish Cypriot leader Dervis Eroglu. He said both sides seem willing to negotiate again, but complications cannot be resolved. “If you remember, in October I said that if this hydrocarbon crisis will last for a few weeks or even a few months; it would not threaten the process itself. Now it’s lingering on, we are way into the next year and I think is really important that everybody now tries to do what they can to get over this,” Cyprus Mail quoted.
In October, Turkey had reacted to Cyprus’ hydrocarbon exploration activities. The UN official said that during a halt in natural gas drilling by Greek Cypriots, and a simultaneous stop in seismic surveys by Turkey in Cyprus’ exclusive economic zone (EEZ), the UN had tried to bring the two leaders back to the table. However, the efforts failed, Eide said. The hydrocarbon issue turned into a territorial issue.
“The difference on the issue is so deep that it prevents any direct talks about anything which I think is highly unfortunate because we should now be at the table so that these issues can actually be discussed,” said Eide. “And I reiterate that there is a positive step from Mr. Anastasiades and this step should be followed with some kind of response from the other side,” Cyprus Mail quoted.
Eide was referring to last week’s preamble by Anastasiades to the Turkish Cypriots, when the President stated the island’s hydrocarbon resources could be negotiated at the tail end of the talks process.
The UN official will return to Cyprus once again before January 26, the date on which he will brief the UN Security Council on Cyprus, in view of the renewal of UNFICYP’s mandate. On his next visit, he said, the aim will be to secure an agreement between the leaders on a schedule of meetings and a timeline. If he succeeds, he would report back to the Security Council that prospects for a solution still exist, Eide said.
However, Turkey’s foreign minister Melvut Cavusoglu on Wednesday, accused Nicosia of deliberately excluding Turkish Cypriots from sharing in the island’s wealth. In comments to Turkey’s Anadolu news agency, Cavusoglu proposed setting up an escrow account holding the share of natural gas revenues allotted to the Turkish Cypriots. The Turkish diplomat suggested the account could be held in trust by either the UN or the World Bank, Cyprus Mail reported.