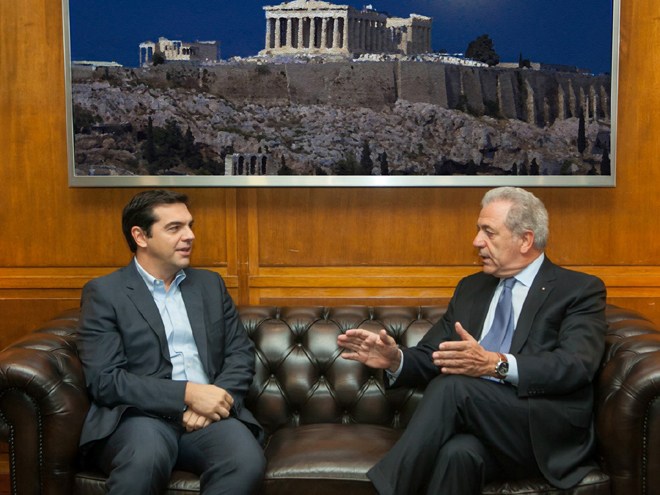 Greek main opposition SYRIZA praised earlier today the intervention of European Union Commisioner for Migration, Home Affairs and Citizenship, Dimitris Avramopoulos, regarding the need for extended flexibility of the Stability Pact for the European South countries. At the same time, rumors have started that Avramopoulos will be SYRIZA’s nominee for the Presidential election that will follow the January 25 snap general elections.

The leftist party, which is steadily leading the Greek opinion polls, just 10 days ahead of the critical general elections, in a statement noted that Avramopoulos’ intervention was of great significance. In addition, it underlined that the Greek government should have done so “a while ago,” instead of “supporting the harshest terms of austerity that strangle the Greek economy.”

Avramopoulos called the European Union to consider a greater flexibility of the Stability Pact for the European South countries, and if this is proved fruitful towards the development of those countries, to keep on with this policy, offering them flexibility as a reward for their efforts.

SYRIZA’s statement fueled rumors that the emblematic New Democracy official may be considered as the candidate for the next Presidential ballot. According to this scenario, if Avramopoulos is elected as the next President of the Hellenic Republic, a SYRIZA-led government would have a greater chance of achieving domestic consensus, while it can also appoint its own European Commissioner as a replacement for Avramopoulos.

It should be noted that during the previous Presidential election, SYRIZA avoided to nominate a candidate and the only one running for the position was New Democracy’s nominee, Stavros Dimas.