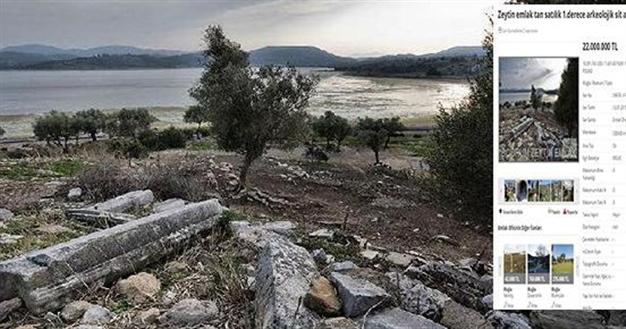 A shocking news story emerged from the Turkish press, as according to the country’s major newspaper, Hurriyet, the ancient Greek city of Bargylia, dating back to the 5th century BC, located in Asia Minor near Gulluk Bay on the northern coast of the Bodrum peninsula, is on sale for the trifle of 22 million Turkish liras (around eight million euros).

According to the newspaper, Turkish law does not allow construction in first degree archaeological sites, therefore the agency’s advertisement underlines that no excavations have been performed on it yet, so the new owners will be free to enjoy an amphitheater hinted to be underground, an area that is believed to belong to the city’s temple, the remains of a Roman bath and a necropolis from the Byzantine era.

On their behalf, Turkish archaeologists have repeatedly called the country’s Ministry of Culture and Tourism to expropriate numerous archaeological sites such as the one in Bargylia in order to ensure their protection, due to the state’s inability to guarantee their security. “Unfortunately, due to an insufficient budget, archaeological sites are only expropriated during excavations or urban projects,” Binnur Celebi, a senior member of the Archaeologists Association, underlined, warning at the same time that some owners may seek to downgrade their site’s status, aiming to open them for construction. “Private ownership of such sites is obstructing archaeological work. However, the person or persons who acquire those sites can absolutely not conduct any construction activities,” he added.

Finally, the agent promoting the ancient city’s sale, Halil Okan Tavasli, said that it has already attracted a considerable number of potential buyers but no agreement has been signed yet.

The ancient Greek city of Bargylia is located on the coast of Caria, in southwest Turkey. It was founded by Bellerophon and named it in honor of his companion, Bargylos, who had been killed by a kick from the winged horse Pegasus. During the Cretan War, in 200 BC, King Philip V of Macedon, nicknamed “the beloved of all Greece ,” winter-docked his fleet in the city’s port when he was blockaded by the Pergamene and Rhodian fleets. Epicurean philosopher Protarchus was a native of Bargylia.