4.7% of People in Greece Are Muslims

After the shocking events that occurred in France over the last week, starting from the terrorist attack in Charlie Hebdo that resulted in the death of 12 people, Europeans have started expressing their fear about what will come next. People are concerned that the attack will lead to Muslim targeting.
In the wake of these incidents, people across the world are once again considering all Islam believers as potential terrorists. Several Islamophobic organizations, such as PEGIDA in Germany, are trying to take advantage of this fact.
According to 2010 data released by PEW Research Center and presented in a recent AFP publication, there are approximately 500,000 Muslims currently living in Greece, representing 4,7% of the population. Meanwhile, the percentages in other Balkan countries are even higher. In Kosovo, there 7.4 million Muslim citizens that translates to 91.7% of the population, in Albania the percentage reaches 82.1%, in Bosnia and Herzegovina 41.6%, in FYROM 34.6%, in Montenegro 18.5% and in Serbia 3.7%.
Furthermore, according to PEW, France has the biggest Muslim population outside the Balkans with 4.7 million Muslim citizens, representing 7.5% of the total population.
In 1990, Muslims accounted for 4.1% of Europe’s population, while in 2010 the figure rose to 6%. PEW estimates that they will reach 8% by 2030. 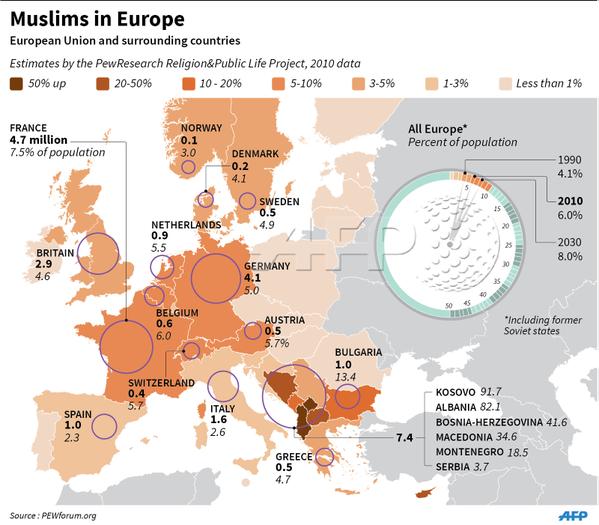