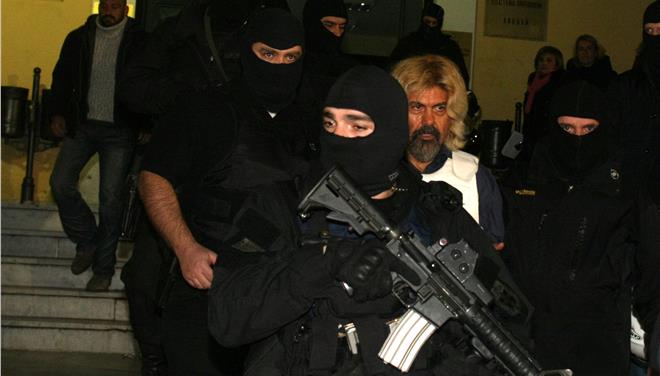 To the newly established maximum security prison of Domokos was transferred earlier today former November 17 (N17) member and convicted terrorist Christodoulos Xeros after his temporary detention to Korydallos prison in Athens, Greece. During the previous days, other N17 convicts were also transferred from Korydallos to Domokos prison where they will serve the remaining of their sentences.

Meanwhile, the stolen van discovered by the counter-terrorism unit in a deserted area of Mount Egaleo in Athens earlier this week is being examined by police in order to establish if it is connected to Xeros and his associates. The vehicle has been transferred to the Directorate of Criminal Investigation (DEE) for further investigation.

It should be noted that in one of Xeros’ hideouts in Loutraki, police found 45 explosive mechanisms inside Tupperware containers as well as the names and addresses of possible targets. His plan was to orchestrate the escape of the leadership team of terrorist group Conspiracy of Fire Nuclei (SPF) from Korydallos prison and then conduct several terrorist hits with their assistance. The attacks would take place during the pre-election period. The explosive mechanisms found are similar to the ones used by N17 in the past. They are the kind of trapped mechanisms that Xeros used to construct and use. They were either made by Xeros himself or someone put them together under his instructions.

Throughout history, a plague, or pandemic, has affected the outcome of Ancient Greek wars, as studies by historians and medical scientists suggest
Business