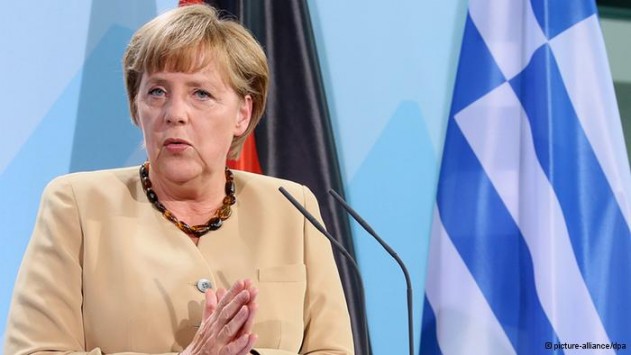 German Chancellor Angela Merkel has played down the chances of Greece exiting the euro zone, but made clear she expects Athens to honor the bailout terms after this month’s election.
With leftist SYRIZA holding a steady lead in opinion polls and party leader Alexis Tsipras promising Greeks that he will fight for the write-off of a big chunk of the debt and reversing required reforms, it is likely that SYRIZA will win and subsequently Greece will come to a collision with its lenders.
“I, as German chancellor, and also the German government, have always pursued a policy of Greece staying in the euro zone,” Merkel told a joint news conference with British Prime Minister David Cameron.
The German chancellor addressed the issue on Wednesday after a German magazine said that her government is ready to accept a Grexit if Athens fails to honor the commitments of the bailout program.
Also, German officials who chose to remain anonymous, allegedly said that experts in the German government have examined the possibility of a Grexit. They expressed the opinion that chances are slim that Greece will leave the euro zone. They are also examining the solution of a compromise with leftist opposition SYRIZA.
Merkel said that she believes that there will be a “successful conclusion” to the issue and that Greece’s European partners will show solidarity, provided that Greece will honor its commitments.
Formal negotiations with Tsipras are seen as premature. It is not absolutely certain that SYRIZA will win and if so, the party will most likely form a coalition, which might take some time. However, in both Berlin and Brussels there is a sense that if SYRIZA wins, a deal would be possible.