Opinion Poll: SYRIZA With a 3.3% Lead Over New Democracy, Papandreou's Party Lower than 3% 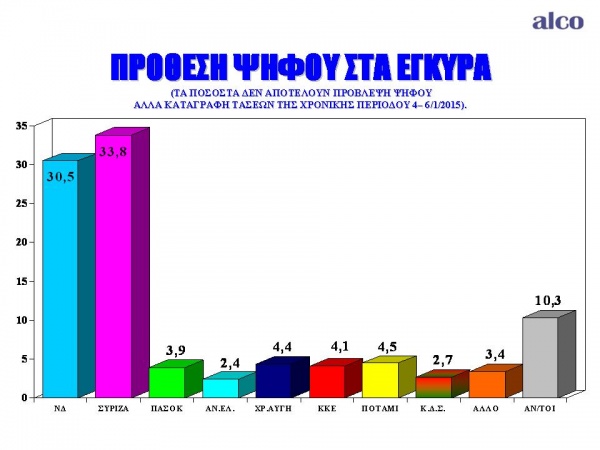 A 3.3 percentage point lead of Greek main opposition SYRIZA against ruling New Democracy recorded a poll on behalf of weekly newspaper “To Pontiki” that will be published tomorrow. The poll was conducted among 1,000 Greeks over 18 years of age between January 4 and 6. It should be noted that it is the first opinion poll to be published after Former Prime Minister George Papandreou launched his new party, Democrat Socialists Movement (KDS), on January 3.

Moreover, the poll recorded other interesting facts, such as the parties’ clusters, the voters’ movements, the key role of undecided voters regarding the electoral performance of the two “gladiators,” the voters’ view on the next government’s major issues and the voters’ desired economic policy to be followed.

The poll comes just 18 days ahead of the January 25 general elections.