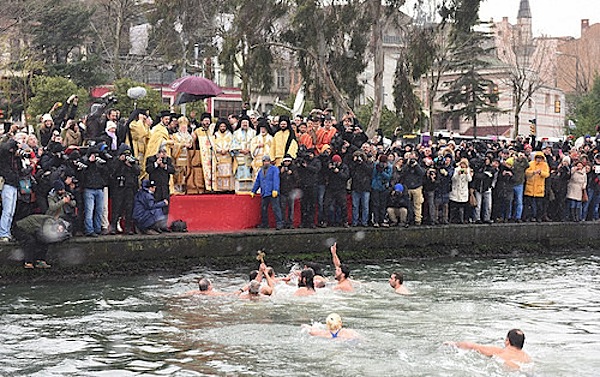 A cross-throwing ceremony was held as part of commemorations on the birth and baptism of Jesus Christ, held at Fener Greek Orthodox Patriarchate in Istanbul.

A group, led by Bartholomew and other members of the clergy, walked to the Fener dock on the Bosporus for the second part of the ceremony in which a cross is thrown into and then retrieved from the water. This competition is held every year despite the freezing temperatures as part of the ceremony to commemorate Jesus being baptized in the Jordan River.

Also in attendance were, President of Togo Faure Gnassingbe, accompanied by his delegation, Greek Consul General Nicholas Matthioudakis, Archons of the Throne and faithful from Turkey and throughout the world.

Bartholomew threw the cross into the water and young men who were waiting in a boat off the Balat shore near the patriarchate jumped into the water to retrieve the cross. The winner was Todor Pasev from Bulgaria. He was awarded a chain with a gold cross.