TechNews
GreekReporter.com Life entertainment Documentary 'Agora: From Democracy to the Market' to Premiere in Greece

Documentary 'Agora: From Democracy to the Market' to Premiere in Greece [Video] 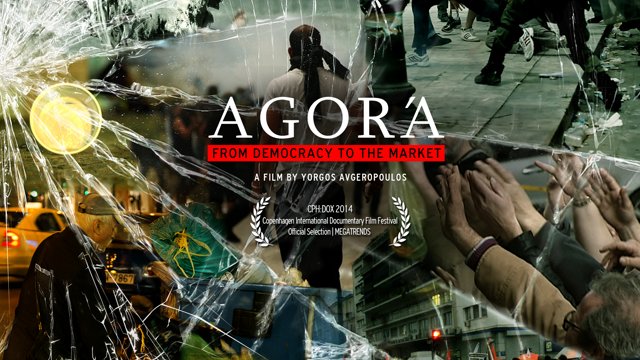 After its world premiere at CPH:DOX – Copenhagen International Documentary Film Festival, acclaimed Greek documentarist Yorgos Avgeropoulos‘ “Agora” will have its national premiere and theatrical release in cinemas on January 15, during a pre-election period that finds Greek citizens amidst a social and economic crisis with no end in sight.

The film will screen at the historic “Alkyonis” and “Studio” theaters in downtown Athens as well as the “Olympion” theater in Thessaloniki. Distribution will gradually expand to other Greek cities.

The Agora was a central area in Ancient Greece city-states. It was a gathering place, an assembly of active citizens, and the City center for political, economic, athletic, artistic and spiritual life. It was the heart of Democracy. In Modern Greece , the word Agora has lost its initial sense and it has come to denote solely the place and act of commercial transactions. It is a dominant word in the reality experienced by Greeks today, as the country goes through an economical vortex that devours human lives in its path.
Greece, a symbol for the European civilization due to its Ancient heritage, is experiencing conditions in post-war history that no European thought would face again. Homeless people, soup kitchens, unemployment, poverty, an unsettled social situation, violent conflicts and the rise of the extreme-right. The dream of prosperity has turned into a nightmare and the political scene of the last four decades is crumbling.
Avgeropoulos witnesses the fall. After 13 years of ongoing reporting and documenting global issues, he urgently turns his camera towards his homeland. He records the crisis’ development from its early stage, while tracing its impact on the lives of simple people from all social classes whom he observes over time. He witnesses popular protests in the streets, the development of solidarity movements as well as the rise of fascism, while at the same time he seeks answers from his country’s most significant political personalities, insiders, analysts and key decision makers from the international political scene.

“Agora” is an international co-production between Small Planet (Greece), Westdeutscher Rundfunk (Germany) and Al Jazeera Arabic (Qatar). The Greek theatrical release will be followed by a French festival premiere at FIPA (January 20-25) and the film will start broadcasting in European and Asian TV networks in February.