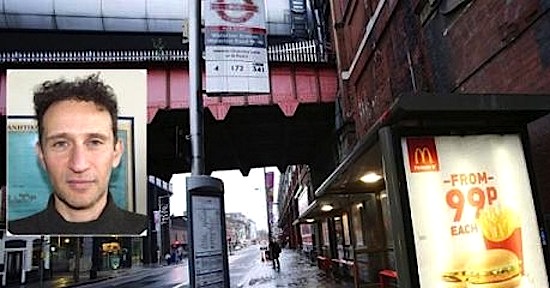 A 43-year-old Greek man was found brutally murdered near London’s Waterloo Train station, early in the morning on Saturday, January 3.

According to London authorities, the deceased is Menelaos Agisilakis and his family has been alerted about the tragic incident. The man was found near one of London’s busiest stations, Waterloo, where he was hit repeatedly on the head.

British authorities were alerted at 2:45 a.m. on Saturday, but upon arrival found that the 43-year-old man had already succumbed to his injuries.

Mark Patten, 30, from Thornton Heath, south London has been charged with the murder of Menelaos Agisilakis, however his motive remains unknown.

A full investigation of the case is currently underway by UK authorities who have publicly called anyone who happens to have any information regarding the incident to communicate with them directly. “This is a very busy part of London frequented by both commuters and those on a night out. My team is keen to hear from anyone who was in the area or passing by at the time of this incident and may have witnessed what occurred or seen something that could assist the investigation,” said Scotland Yard’s Detective Chief Inspector Diane Tudway.

Meneleaos Aligizakis was currently professor of Science at Athens College. He studied piano at the National Conservatory (1979-1987) and graduated in 1995 from the Physics Department of the University of Athens, specializing in Telecommunications and Computer Science. He worked as a teacher for years, teaching Physics, Mathematics, Chemistry and Computer Science at schools in Athens and England, as well as private colleges and universities in both countries. He had taught at the Ursulines School, the College of Westminster, the College of Wimbledon, the School of Latimer and others.