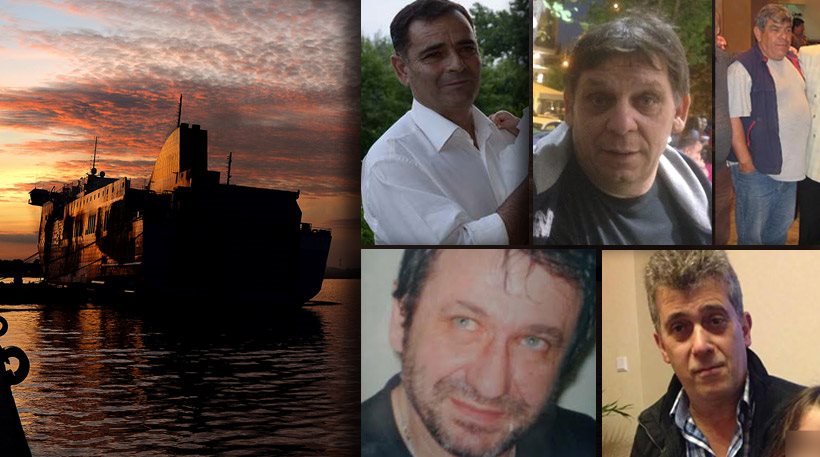 Five Greeks are still missing after the fire accident on passenger ferry “Norman Atlantic.” Greek newspaper “Proto Thema” found the families of the missing and painted their portraits using the full of agony words of their relatives:
Vangelis Karavangelis
The 55-year-old man has a wife and three children in Berlin, where he currently lives. Several years ago, he left Greece and his mother, whom he loves dearly, to live with Maria, his other love. He is the breadwinner, dedicated to his family, and works as a technician in a Berlin factory. Every opportunity he had, he visited his mother in Agia Anna, Euboea. This time he visited her for Christmas and wanted to return to Berlin to spend New Year’s Eve with his family.
Yiannis Sofos
The 49-year-old man from Boeotia drives refrigerated trucks ever since he was very young. He is also married with three children and spends most of his time on the wheel. His nephew told the newspaper reporter that Sofos did not want to make this trip but he needed the money to provide for his children. He also said that one of the survivors told him he thought he saw Sofos getting on a rescue boat.
Alexandros Koufogiorgis
Born in Thebes, Koufogiorgis boasted that his childhood dreams became reality. The 55-year-old claimed that he could have been a professional soccer player but he gave that up in order to live a normal life and raise a big family. He is a father of four, something that he says is luck, a blessing and immense joy. He is also a grandfather and used to say that his grandchildren will inherit the soccer bug from him and become professional players.
Vassilis Tsamis
The 54-year-old man from Thessaloniki is also a truck driver, having spent countless of hours on the wheel. His friends and family call him “the joker” because he likes to tell jokes and make people laugh. He became a truck driver so he could travel to many far destinations. He also wanted to make as many trips as possible so he can make lots of money in order to provide the best life possible for his family. His nephew says that he heard from survivors’ reports that Tsamis was helping people during the fire but no one knows what happened afterwards.
Yiannis Symeonidis
Also a truck driver, the 53-year-old man from Lakkoma of Thessaloniki had claimed that he was happy because he recently became a grandfather, thanks to one of his two daughters. Symeonidis worked hard so that his daughters could get university degrees. His wife, Anna, said that she had never heard him complain about his hard work and the long days he spent away from his family and home. Unable to endure the agony of his disappearance, one of his daughters flew to Italy in hope she will find her father.