Cypriot President: No to Dialogue as Long as Turkey Violates Cyprus' Sovereignty 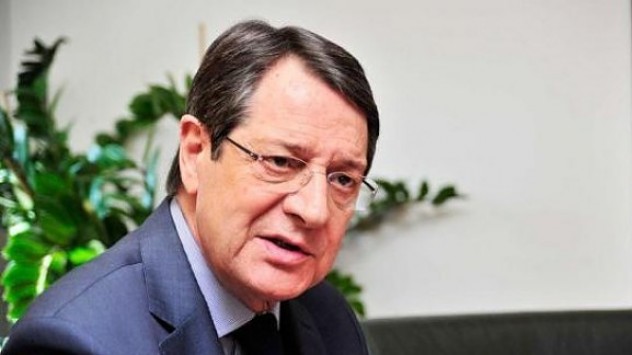 Cyprus’ President Nicos Anastasiades has ruled out his country’s participation in talks with the Turkish-Cypriot side as long as the Republic of Cyprus is subjected to the violation of its sovereignty rights. Furthermore, the Cypriot President also underlined that the Cyprus problem cannot be solved under such conditions.
In a written statement, issued after today’s meeting with the political parties leaders’ council, Anastasiades clarified that the meeting was centered on the ongoing unacceptable violations of Cyprus’ sovereignty by Turkey, the issued NAVTEX and the presence of seismic vessel “Barbaros” within the Republic’s Exclusive Economic Zone (EEZ) since October 2014.
Anastasiades reiterated the repeated, stable position of the Greek-Cypriot side that can be summarized as follows: “As long as the violation of Cyprus’ sovereignty rights continues, my participation in the pre-set dialogue to solve the Cyprus problem is impossible.”
“I repeated the basic law principle that the country’s natural wealth belongs to the state, while responsible for its administration, in favor of the country’s legal citizens, is the government. Therefore, actions challenging the sovereignty of the Republic of Cyprus under the pretext of protecting the rights of Turkish-Cypriots are not only contrary to international law, but also invalid,” said the Cypriot President in his written statement.
“It is also clear that the participation of Turkish-Cypriots in issues related to the management and exploitation of the country’s natural wealth presumes the solution of the Cyprus problem based on what has been agreed so far. It is equally understandable that all pending issues could be discussed during the final stage of negotiations when maps concerning territorial adjustments are submitted and dialogue would be in the final course towards a solution,” he added.
Finally, Anastasiades repeated that the island’s natural wealth is the strongest incentive for a meaningful dialogue, if threats or blackmail are kept away in order to find a commonly accepted solution on the Cyprus problem as soon as possible, which would benefit both Greek and Turkish Cypriots, as well as the neighboring countries, including Turkey.