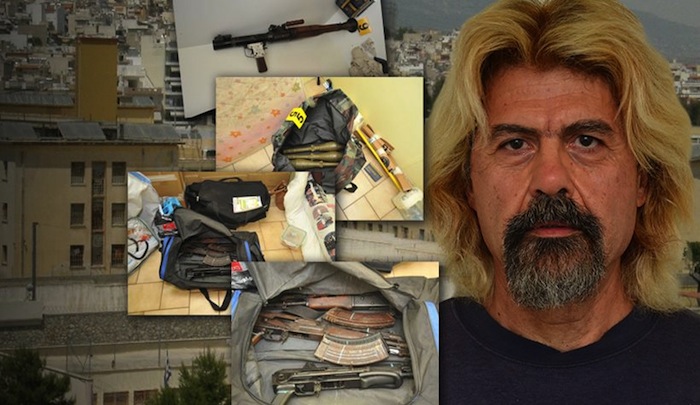 With the arrest of former “November 17” member Christodoulos Xeros, Greek Police averted a very serious blow to the heart of the country’s prison system, at its biggest prison in Korydallos, Athens, within the general elections period, Public Order Minister Vassilis Kikilias underlined a few minutes earlier during a press conference held together with police chief Dimitris Tsaknakis at the police headquarters.

As explained by Greek Police, in Xeros hideout in Anavyssos, apart from the impressively extensive armory, handwritten notes with detailed routes of approaching and alternative escape routes from the Korydallos prison were found.

Moreover, Xeros’ biological material was identified with the one found in an explosive device sent as a parcel to the Itea police department earlier in 2014. Tsaknakis highlighted that the range and power of the terrorist’s arsenal could result in a major attack, with possible numerous casualties. 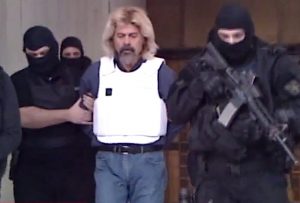 During the search in Xeros’ hideout, police found one anti-tank gun, three anti-tank rockets, eight Kalashnikovs, one of which had a special sight sniper laser, a container with a quantity of explosives, three pistols and detonators. In addition, sacks containing sand were found in his yard, which according to police would be used around the trapped vehicle and push the blast from the explosion to the specific target. This specific technique was also followed by “November 17.” Furthermore, among the findings, according to reports, are detailed maps of Athens and Epirus (Xeros would allegedly get away crossing the Greek-Albanian border), and attack plans that would be used during the hit. Also, 100 kilos of explosive material was found inside a metal oil barrel. The head of the Greek Police also revealed that at least two vans and an unknown number of associates (at least three) would be used during the attack.

One fake identity card belonging to a young woman who is considered to be one of his associates was also found in Xeros’ rented hideout in Anavyssos.

Earlier, during his arrival at the attorney’s office, amid heavy security measures, Xeros said “resistance to Troika. No savior will save us, nor administrator.” It should be noted that Xeros rejected to state anything before the attorney.

Xeros was arrested yesterday by Greek authorities in Anavyssos, Greece. He had escaped custody almost a year ago, after he violated his leave from Korydallos prison.