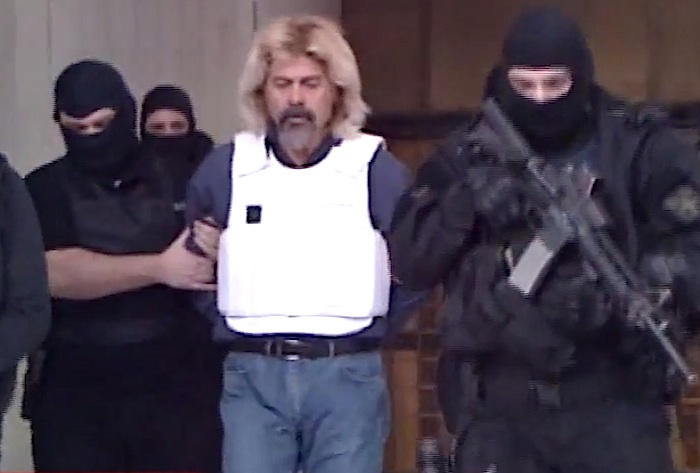 Before the attorney will appear today noon or afternoon the former member of “November 17” terrorist group Christodoulos Xeros, who was arrested yesterday by Greek authorities in Anavyssos, Greece. Xeros had escaped custody almost a year ago, after he violated his leave from Korydallos prison.

At the moment, the interest of the counter-terrorism unit of the Greek Police is focused on two aspects: First, the findings of the house he rented and second, the persons who might have assisted the fugitive.

The findings of the rented house in Anavyssos lead the police to the conclusion that Xeros was preparing a new major hit. This time, police officials say, it seems that he would go into a new type of attack, unlike the previous ones that included parcel bombs, such as the one found on April 29, 2014, by policemen in Itea, and which included a significant amount of explosives. Xeros was allegedly preparing a big hit with the use of a trapped vehicle or rocket-propelled grenades, possibly combined with Kalashnikovs.

During the search in Xeros’ hideout, police found one anti-tank gun, three anti-tank rockets, eight Kalashnikovs, one of which had a special sight sniper laser, a container with a quantity of explosives, three pistols and detonators. In addition, sacks containing sand were found in his yard, which according to police would be used around the trapped vehicle and push the blast from the explosion to the specific target. This specific technique was also followed by “November 17.” Furthermore, among the findings, according to reports, are detailed maps of Athens and Epirus, and attack plans that would be used against a political or economic objective. Also, according to initial estimates, 100 kilos of explosive material were found inside a metal oil barrel.

Finally, the counter-terrorism unit investigation has turned to at least three people who have allegedly assisted Xeros with his escape on January 6, 2014, offering him accommodation outside Athens and in particular in Aegio, Loutraki and Epirus.

Xeros had been under surveillance by authorities for several days and was arrested while trying to get into a hideout located in the area, which he had rented under a false name two months ago. When he was arrested, he was wearing a blonde wig and had grown a beard, while he was armed with a gun.

According to Xeros’ lawyer, the terrorist knew he was being watched and was about to disappear again. He also said Xeros didn’t want to be arrested at night because he didn’t want to exchange fire with policemen and didn’t plan to use the weapon he was carrying when captured.
He also noted that Xeros does not accept responsibility for any of the crimes he is being connected to while he was on the run and that he will not cooperate with the investigator because his aim was to avoid arrest.
“All this time, he lived under the stranglehold of the police, as he had already realized himself. This did not give him the opportunity to cooperate with anyone or any opportunity for anything,” his lawyer said, adding that the heavy weaponry found in the house was acquired by Xeros and that he takes full responsibility for it.

He had previously been charged for 33 acts committed as a member of “November 17.” He was given six life sentences and 25 years in prison for his involvement in six murders, various explosions, robberies and his involvement with the terrorist organization.

A new press conference on the case is expected to be held in the following hours, during which the possible targets of Xeros will be named.