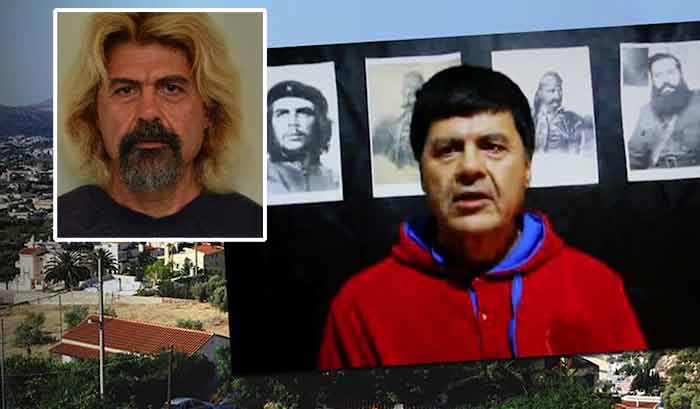 Known Greek terrorist Christodoulos Xeros was arrested shortly after 2 p.m. on Saturday, January 3, 2015 by Greek authorities, in Anavyssos, Attica, Greece . Xeros had escaped custody almost a year ago, after he violated his leave from Korydallos prison.
Xeros had been under surveillance by the authorities for several days and was arrested while trying to get into a hideout located in the area, which he had rented under a false name two months ago. When he was arrested he was wearing a blonde wig and he had grown a beard, while he was armed with a gun.
The hideout area is being investigated by the Anti-terrorist Unit of the Greek police, while the arrested terrorist is being transferred to police headquarters for interrogation.
The fight against terrorism is continuous and strenuous, Public Order and Citizen Protection Minister Vassilis Kikilias said on Saturday, speaking to press after the recapture of wanted fugitive and convicted terrorist Christodoulos Xeros earlier in the day.
“We are safe and this strengthens the stability we all want and which is necessary for the country,” he added.
According to the chief of police, Dimitris Tsaknakis, authorities discovered Xeros’ hideout after many months of search and by utilizing information received.
He said police had been searching the area of Anavissos door-to-door for the past three months in order to locate him, adding that the anti-terror unit has already started searching the house in which Xeros had been hiding.
Christodoulos Xeros, convicted member of the terrorist organization November 17, absconded last year, on January 6, after been granted leave to visit his family in Chalkidiki, where his sister resides.
Xeros had previously been charged for 33 acts committed as a member of November 17. He was given six life sentences and 25 years in prison for his involvement in six murders, various explosions, robberies and his involvement with the terrorist organization.