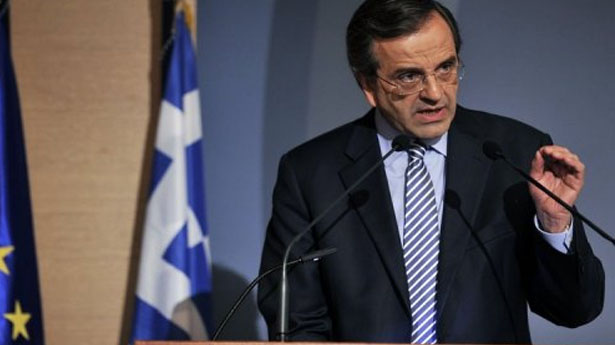 Greek Prime Minister Antonis Samaras lashed out at main opposition Radical Left Coalition (SYRIZA) accusing it of ignorance and arrogance, and expressed optimism that his party New Democracy (ND) will win the elections using truth and responsibility as weapons.
Addressing the ND executive secretariat, he said that “the election battle ahead is the most important Greece has had in decades,” adding that “the people did not want it because it creates risks just when the country had exited the recession and was on its way to the day after.”
He said that the country was dragged to elections by a minority comprising MPs from SYRIZA and Golden Dawn, adding that “this alliance of irresponsible and extremists has canceled out any potential for consensus. How can you reach a consensus when you are being blackmailed by a minority in parliament; can you consent to instability and destabilization in the country when Greece appears to be able to stand on its own feet again. How can you reach a consensus on division and the country’s isolation?”
“We have the right to three things, the country’s European course which they undermine, the economic growth that has just started and they want to cancel out and the democratic normalcy they boycott anyway they can,” the prime minister underlined.
Referring to the presidential election, he said that despite the slander and blackmail most of the independent MPs voted for Stavros Dimas but there were a few that gave in to blackmail, adding that “even SYRIZA’s Manolis Glezos did not tolerate the odd alliance between SYRIZA, ANEL and Golden Dawn, realizing what the country’s dysfunction is.”
He referred to the recent opinion polls, noting that SYRIZA’s lead is narrowing, and said “we will win the elections because only we have a policy and a program. The economy has made huge progress but we have not exited the crisis yet. If SYRIZA wins the elections, and does half of what it says, we will get nothing from Europe because if SYRIZA does what it says the Greek economy will be 35-38 billion euros short. Where will they find this amount? What cuts will they have to impose? Soon after they will not have the 12 billion euros their program needs. What will they do on February 28 when the two-month extension expires? Will they ask for a new one? How will they pay the state bonds? Will they declare cessation of payments?”
He underlined that “people know what will happen if New Democracy wins the elections. Within a month the [troika’s] review will be completed and we will move on to the day after with the support credit line, political uncertainty will end, spreads will drop, we will be able to return to the markets, liquidity will increase. Dozens of investments are waiting to be made because we bring investments and they drive them away.”
The prime minister added that, “theoretically, if nothing of all this was true, the country would have entered a period of major uncertainty and would have been on the verge of bankruptcy. This is no scaremongering. We have to say it because we are going to elections using truth as a weapon, not hiding truth. People respond negatively to another thing as well: to SYRIZA’s unbelievable arrogance. Yesterday they even warned us not to take the governance documents with us.”
“With each day that passes, odds turn against them. They seem intoxicated by arrogance based on ignorance and not on power. Our greatest ally is the truth, we will speak the truth and we will win. Our big weapon is responsibility. We, as a responsible power, will create the new Greece ,” the prime minister concluded.
(source: ana-mpa)