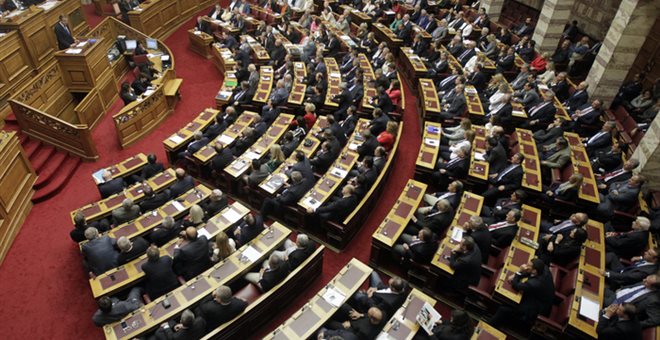 “In a last attempt to avoid the perceived appeal to the polls the Prime Minister, via this interview, resorted to another alarmist adventurism,” main opposition party, SYRIZA, highlighted in its press release, at the same time accusing Mr. Samaras of being obsessed with power.

Citing the Greek monk and scholar of the 18th century, Caesarius Daponte, the Independent Greeks (ANEL) commenting on Mr. Samaras latest public appearance underlined that “too much pain can drive you insane.”

“Those who speak of consensus, either now investing in fear (the government) or after the elections, while cultivating false hopes (the main opposition), actually have one goal: To trap the people to the same EU one-way streets of the capital and the long-lasting memorandums. Opposing to blackmailing and illusions people need a strong KKE” refers to press release of the Communist Party of Greece (KKE).

“The emergence of alarmism as a key political weapon by the government cannot obscure the reality. On the contrary it harms the country,” underlines Democratic Left (DIMAR), explaining that “the greatest danger to society and the economy are the policies that have irreparably wounded social cohesion and maintained the recessionary suffocation.”

“The people were expecting the Prime Minister to take some new initiative to break the deadlock. Unfortunately, Mr. Samaras appeared in the role of the opposition in today’s opposition” said the newly launched To Potami in its statement, commenting on the Greek Premiers’ interview.