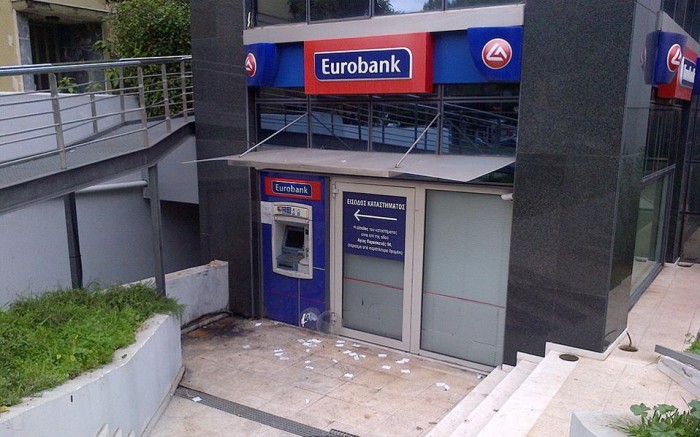 A group named “Anarchist Attack Consortium” claimed responsibility for the failed terrorist attack against a bank in Chalandri, Athens.
In a notice posted on the Greek website Indymedia, the group states that it was an action related to the hunger strike by Nikos Romanos. It was “a guerrilla action in solidarity to the struggle of the anarchist prisoner Nikos Romanos.”
According to Greek news, the perpetrators noted the reasons that the attack failed, pointing out that the bomb did not explode due to a manufacturing error.
Furthermore, the group stated that their goal is to create a revolutionary movement with anarchist characteristics which will support and organize armed groups and wider aggressive initiatives aimed at bringing down the dominant regime and abolishing the state.
The failed bomb attack took place in Chalandri on December 10, at a Eurobank branch. The bomb consisted of 2 pounds of explosive material, a battery array, a clock, a detonator and an incandescent lamp. The explosive material was compressed in a metal coffee box and placed in a bag found outside the bank in front of the ATM.

The Four Areas in Greece Most in Danger of Tsunami