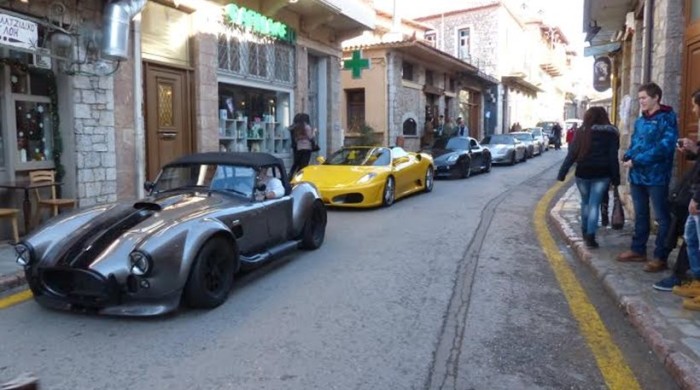 Even in the difficult times of the Greek economic crisis, there are people who live in the country and are still able to drive some of the most luxurious cars in the world. These people share a common love for powerful engines and high speed, and they often organize trips in order to drive long distances and spend some quality time with their cars and each other.
Members of SpeedSector, a luxury car club, went on an one-day trip to Arachova, Greece , one of the most popular winter destinations, located on Mount Parnassus. The excursion had been planned ahead of time and the club members that decided to participate met at a highway parking lot between Athens and Lamia.
A grey collectible Shelby Cobra, Ferraris, Porsches, Lotus, Mercedes, BMWs and Audis made their way to Arachova, turning the small town into a luxury car show.
Locals were very excited at the sight and rushed to their cameras and smartphones in order to capture a picture of the rare sight.
The drivers enjoyed a meal at one of the local restaurants and around the evening began their journey back. However, they already made plans for the next trip in another part of the country.
SpeedSector is luxury car club that has been organizing such trips since October 2013. More than 50 members participate in each trip while a total of 300 people are currently enrolled in the club. In order to become a member, one needs to own a super car and agree to the terms and conditions that have been set by the club’s founders.